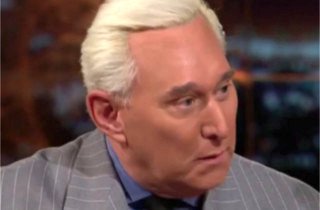 Roger Stone has been a longtime opponent of the Clinton family, and he has repeatedly pushed views and attacks against them that range from hard-right to fringe-right. On Sunday, the Donald Trump hatchet man gave a speech where he outlined a theory of his about how Bill Clinton‘s daughter isn’t really his daughter.

Stone was talking about an anecdote from his book, The Clintons’ War on Women, wherein he explains how he’s convinced that Chelsea Clinton was born from an affair between Hillary Clinton and former Associate Attorney General, Webb Hubbell. From there, Stone went on to say that Chelsea Clinton looks nothing like her father despite “four plastic surgeries” to make herself more resemblant to her mother’s husband.

“She looks just like her daddy, despite four plastic surgeries, the youngest one when she’s only 18. What 18-year-old gets plastic surgery unless you’re trying to, I don’t know, thin out the lips and make you look less like your daddy.”

Stone proceeded to rip into the Clinton daughter as a “grifter” who oversees the Clinton Foundation’s supposed money-laundering operation.

Watch above, via Media Matters.