Rush Limbaugh: ‘Where Are The Charges Of Racism’ Against ‘Deranged’ Wasserman Schultz? 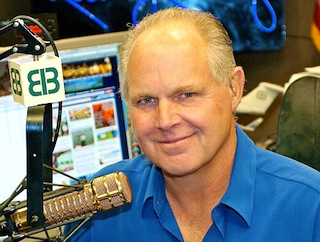 Today on his radio show, Rush Limbaugh fielded a caller accusing Debbie Wasserman Schultz of racism and a liar in her scuffle with Allen West. Limbaugh agreed, calling Wasserman Schultz “deranged” and “typical of the American Left” and lamenting that no Republicans are getting West’s back against the Liberal “hit squad” that’s targeting him, instead leaving the job up to “talk radio hosts.”

Limbaugh explained that Wasserman Schultz had broken House decorum by saying anything about West on the floor and that he was just a “tough guy” “firing back.” He pointed out that she had cut large amounts out of Medicare by voting for “Obamacare.” He reserved some real vitriol, however, for all the other Liberal women who had joined Wasserman Schultz in accusing West of sexism due to his angry email, bringing Bill Clinton and accusations of sexual favors into the conversation for some reason.

Despite not “taking these women seriously,” Limbaugh went on to describe the importance of defending West and clearly he’s doing a really good job. Compared to Limbaugh’s statements here, West’s comments don’t seem all that sexist at all.