S.E. Cupp Gets Real on Trump, GOP: We May Have to Lose This One to Ever Win Again 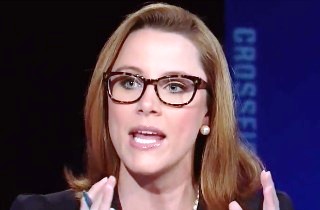 Conservative CNN commentator S.E. Cupp has voiced her displeasure with Donald Trump on numerous occasions, having declared that his ideas will cost him the presidency for being too morally and constitutionally repulsive to the GOP. Today, Cupp wrote a column on Townhall where she detailed that even though a Hillary Clinton Presidency might not be a desirable outcome, it would be preferable over Trump continuing to damage the Republican brand.

Cupp noted that despite Trump’s threat to run a third-party campaign and earning condemnation across the board for his rhetoric, the mogul has managed to keep a significant chunk of conservative voters in his corner. In the event that Trump decides to spite the GOP mainstream by going independent, Cupp expressed that the 2016 election might be a necessary sacrifice so that Republicans will be able to win in the future.

“Whatever group he claims to represent should have to embrace his dimwitted and divisive proposals without the imprimatur of the Republican Party or the conservative movement,” Cupp wrote. “Republicans shouldn’t have to defend religious tests, internment camps or Eisenhower’s ‘Operation Wetback’ just because Trump and his goon surrogates do… if Trump wins the nomination and runs as a Republican, we’ll have Democrats like Clinton in the White House for the next 50 years.”

Cupp continued, saying how Democrats have successfully smeared conservatives with the same brush as Trump, and that his continued run and potential presidency would cause incalculable harm to the GOP. On that reality, she said:

Just imagine a debate between Hillary Clinton, Donald Trump and Marco Rubio, for example. I bet Rubio would actually look pretty great next to those two. So would Christie. Or Fiorina. At the very least, in those cases there would be an actual Republican on the stage representing conservative values, instead of a charlatan carnival barker… Donald Trump’s near-nihilistic determination to destroy the Republican Party shouldn’t get any more help from Republicans. I know it’s a painful prospect — but we may have to lose this one to ever win again.