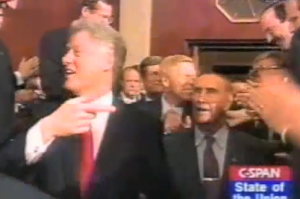 It turns out Congress isn’t as overcrowded as it sometimes seems during the annual State of the Union address. Maybe you’ve noticed when the President walks into the chamber how the members of Congress are falling out of the aisle into POTUS’ path and–sheer coincidence of course–into the path of the television cameras. Hey! That’s my Congressman totally shaking the hand of the President! I’ve got to vote them back into office whenever they run again or whatever!

Seating–as we’ve heard so much about in recent weeks with the drive to get all bipartisan and cozy–is not assigned, and politicos report you’ve got to arrive very early (even hours) to snag a POTUS-and-camera seat. Well, the gang over at Salon have had it up to HERE with these Congressional “Aisle Hogs.” They’re calling ’em out:

With the help of C-Span’s video archive, we went back and looked at the last 10 State of the Union speeches, dating back to the end of the Clinton presidency, in an effort to identify the members who have been most persistent when it comes to claiming the best seats in the House. The process, we will admit, was inexact. For most years, we were at the mercy of the camera shots that were shown on C-Span, which do not always capture everyone gathered on the aisle. But we think we’ve seen enough to crown the five biggest aisle hogs in Congress

The top five are all Democrats, including Sheila Jackson Lee and Dennis Kucinich. Salon put the whole thing together in a video, which is oddly hilarious and must-watch. Check it out, from Salon:

CongressSalonState of the Union
Tips