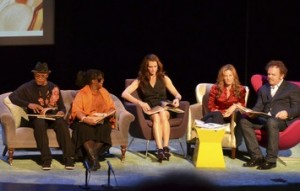 Actor Samuel L. Jackson has become the latest Hollywood figure to call the Tea Party racist, and also briefly weighed in on the Rick Perry “N*ggerhead” controversy, when New York Magazine‘s Dan Amira and Catherine Coreno caught up with him at a benefit for the Children Of Bellevue’s Reach Out And Read program Monday night. Jackson also said he didn’t think the controversy surrounding Perry’s hunting camp would hurt the candidate, saying, “He’ll actually gain respect from a lot of people that he didn’t have respect from before.”

Jackson’s remarks, it appears, were not made with the benefit of having actually read the details of the Perry story, or Perry’s response. According to NY Mag’s Daily Intel, when they briefly interviewed the actor, he ” still hadn’t heard about it. So we looped him in.”

From the sound of their transcript, it appears they looped him in in real time:

NYM: What do you think about the controversy surrounding the name of Rick Perry’s hunting camp?

SLJ: How do I not know about it? What’s the name?

NYM: Yes. Does that surprise you?

Echoing the sentiments of many of the sources in the original WaPo article, Jackson seemed to view the name as just a fact of life in some parts of the country. ” I grew up in the segregated South, nothing surprised me,” he said. “That’s not surprising at all.”

He also said he didn’t think the scandal would hurt Perry with Republicans. “He’ll actually gain respect from a lot of people that he didn’t have respect from before,” Jackson said.

“The division of the country is not about the government having too much power. I think everything right now is geared toward getting that guy out of office, whatever that means,” he said, echoing Freeman. “It’s not politics. It is not economics. It all boils down to pretty much to race. It is a shame.”

His response is unlikely to earn the actor any new fans on the right, but his observation, that throngs of protesters in pre-Civil War garb didn’t take to the streets over massive government spending and sweeping health care legislation until a black guy was in charge, has at least superficial merit.

“Yes, the Grinch deserves to die, and I hope he burns in hell!“