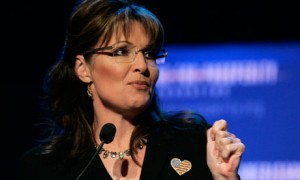 Former Alaska Governor Sarah Palin lit into the media for their coverage of Newt Gingrich’s ex-wife’s claims that the former Speaker of the House asked for an “open marriage,” telling Sean Hannity on his radio show, they “overplayed their hand.”

“The American public could really care less about being Joe McGinniss’d, not when there are real issues,” Palin exclaimed. “Newt Gingrich’s ex-wife is getting ready to reveal all, again — she has already done that, it seems, like a few times.”

“I call them ‘dumb arses,’” Palin added. “They think by trotting out this old Gingrich divorce interview — that’s old news and it does feature this disgruntled ex- that claimed that it would destroy a campaign. All this does is, Sean, is incentivize conservatives and independents who are so sick of the politics of personal destruction because it’s played so selectively by the media….Their target in this case, Newt is now going to soar even more because we know the game now and we just won’t put up with it. So you know, good call media. Way to go to covertly hype this, even with Gingrich opponents. For being so brilliant, they sure are dumb.”

Palin previously called upon South Carolina voters to support Gingrich on Hannity’s Fox News program on Tuesday, saying “If I had to vote in South Carolina, in order to keep this thing going, I’d vote for Newt and I would want this to continue,”

Listen to Palin slam the media below: