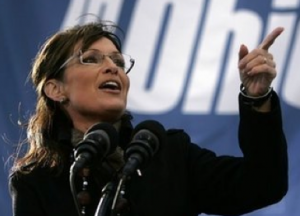 Let me keep a nice and tidy story here and get right to the Sarah Palin quote: “Goodness, cleaning up the sloppiness of reporters could be a full time job,” the former Alaska governor wrote on Facebook, exasperated over the “sloppy” work of a reporter for The Daily Caller, who Palin insists “buried” her quotes.

The Tucker Carlson-led publication used quotes from a 650-word statement Palin provided, and then ran the statement in its entirety on the story’s second page. And yet Palin deemed that unacceptable, writing on Facebook that “in response to The Daily Caller’s online inquiry, I gave them a statement that the writer buried on his story’s second page (which most people won’t even notice – I didn’t even notice it.”

The bizarre encounter apparently exploding into the social media world after some unusual conditions Palin’s press rep demanded from the DC writer, who was interviewed himself by Talking Points Memo:

Palin’s criticism offered a window into her staff’s approach to the press. In an interview with TPM, the reporter who wrote the story, Chris Moody, said he was “surprised” to see her Facebook post given that Palin aides had demanded he make the entire Palin statement available — which he did — as a precondition to giving him any kind of a response to his questions.

“Palin’s spokesman said she could give me a quote on the condition that I run the entire statement,” Moody told TPM. “After some back and forth, I said I would write the story that accurately represented her view, with the full quotes available for readers. Her spokesman said that would be fine.”