Sarah Palin: The ‘Lamestream’ Media Is Hurting Our Troops
video

Sarah Palin: The ‘Lamestream’ Media Is Hurting Our Troops 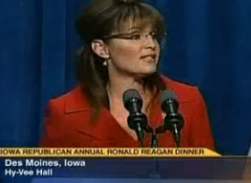 Sarah Palin, who may or may not have unofficially launched her 2012 Presidential campaign in Iowa on Friday (I suspect she’s just relishing the idea that people think she could run for president), thinks “deflated” beltways pundits (hey Karl!) should “reload with truth” for the “sake of our country.”

Fear not, Palin isn’t holding grudges. Despite the fact she doesn’t know which members of the GOP are pulling the strings in their high-up rooms — and doing it badly, she notes! — “Coach” Palin believes everyone has a constructive role to play. One of those constructive roles, says Palin, is “holding the press accountable when you know their making things up and telling untruths.” Alas, she makes no mention of whose “role” it is in the GOP playbook to hold politicians accountable when they make things up and tell untruths.

Needless to say, Palin’s crusade against the “lamestream” media is on behalf of the troops: “How dare anyone disrespect our troop’s sacrifice by claiming the right to print and say anything without a corresponding responsibility to truth.” Indeed. Perhaps if Palin ever find herself in the company of President George W. Bush she can put the same question to him regarding Pat Tillman.

Moreover, people who give quotes on “deep background” — “if they exist” — are “cowards.” Sadly, Palin does not supply an official descriptive for politicians who refuse to give media interviews outside their paid talking head gig at cable news outfits. Journalists however are mostly “gutless.”

Interestingly, Palin, perhaps buoyed by Christine O’Donnell‘s win on Tuesday, was not afraid to scorch the pundit earth, as it were, admitting that not all the ‘lamestreamness’ has been coming strictly from the Liberals (though, naturally, Liberals are worse) some on the far right are guilty of it also.

However to prove she was a team player, Coach Palin then called out her “playbook.” Literally. Among other things it requires Limbaugh to “go deep” and “Hannity, Levin, Beck, Michelle, Laura, Tammy, all y’all, we need everybody working together” including Karl Rove who Palins encourages to “see the light.”

“And Karl: go to – here! You could come to Iowa, and Karl Rove and the other leaders, who will see the light and see that there are the normal, patriotic, hard-working Americans, who will say no, enough is enough. We want to turn this around and we want to get back to those time-tested truths that are right for America.”

GOP meet your Frankenstein. Video below.