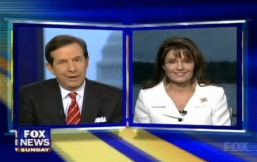 Here is further proof that Sarah Palin is some sort of political, media genius. Any other politician in the country who announced on a nationally televised Sunday morning talk show that the President of the United States didn’t have “the cojones” that Arizona Gov. Jan Brewster has when it comes to taking on immigration would likely be forced to apologize within 24 hours. Sarah Palin, meanwhile, has probably just inspired a new t-shirt line.

Palin appeared in a taped segment on (it probably goes without saying) Fox News Sunday this morning to talk about a variety of issues. She had plenty of sound-bitey, weirdly constructed things to say about how President Obama has “deceived” the nation, and how she’s not surprised that independent voters are less than enamored by her: “I don’t blame people for not knowing what I stand for, If I believed everything I read in the media, I wouldn’t like me either.” Presumably this is the same media that has zero access to her.

Be that as it may, the portion of her segment which will carry over to the t-shirt business (and/or a Facebook note) is this exchange regarding this week’s ruling on the Arizona immigration law, which removed many of its more controversial elements.

That’s unfortunate that the judge chose those steps. But it is temporary. Jan Brewer, bless her heart, she’s going to do all that she can to continue down the litigation path to allow secure borders. Jan Brewer has the cojones that our President does not have to look our for all Americans in this desire of ours to secure our borders and allow legal immigration to help build this country as was the purpose of immigration law. If our own president will not enforce a federal law, more power to Jan Brewer.

Emphasis mine. And people were worried that after Obama’s election Jon Stewart would have nothing to do. On another note, it’s fairly astounding that in less than two years the nation has gone from Hillary Clinton nutcrackers to Sarah Palin, the GOP’s top hope for the White House, accusing the president of not having enough balls. I suppose in certain circles this might be considered progress. Watch the clip below.