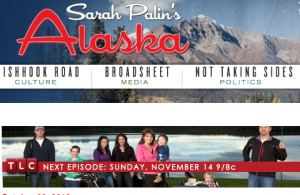 Yesterday, we told you about SPALASKA, Sarah Palin’s Alaska‘s official site. (Its name is so fantastic that we think it should always be written in capital letters only.) Today, we learned a little more about the people that make SPALASKA tick—and found out that one of its bloggers, Danielle Johnsen, has written some pretty negative things about her new boss.

Brian Ries at The Daily Beast reports that surprisingly enough, Palin’s new media blogger—David Wm. Murray—is an Obama-supporting, NPR-listening “Democracy Now!”-lover, according to his Facebook page. Her head strategist and political blogger, Brian Reich, is a former Clinton White House staffer. But the strangest pick of all is Johnsen, who has a history of writing disparaging things about Palin on her personal blog:

“If it’s not obvious to you yet the destruction Sarah ‘Hockey Mom’ Palin can cause to the United States, maybe the below interview can clue you in,” Johnsen wrote about Palin’s disastrous interview with Katie Couric in an old post on her personal website. “McCain either made a more dangerous move than picking Sarah Palin as his running mate or he staged the most perfect photo op and won the election yesterday.”

She also wrote: “I would assume that since America has grown accustomed to pathetic leaders who just barely make sense when speaking and fuck up 75% of the time as adequate enough that this somehow gives Palin even more traction.”

And: “Why did the RNC see it fit to dress up Gov. Palin in the way that they did, basically making her Cindy McCain 2.0?”

And, finally, on McCain naming Palin as his VP pick, Johnsen wrote it was “the nail in the coffin for McCain with me and my friends.”

“The fact that he chose someone so close minded, judgemental [sic], and lacking in experience was shocking to me, but that he used it to grab Hillary Clinton supporters was even more offensive,” she wrote, adding, “While I can respect Gov. Palin for the job she has done in Alaska, she is not ready for the world stage.”

The good people of SPALASKA say that their political affiliations shouldn’t matter, since their job is to promote the show rather than to promote some sort of partisan agenda. After Glynnis MacNicol‘s initial post about SPALASKA went up yesterday afternoon, Johnsen tweeted a thank-you and included this vow: “And we promise it [the website] isn’t political. At all.” (We can’t include a link because Johnsen, whose Twitter handle is @spielster, protects her tweets).

Reich expressed a similar sentiment to The Daily Beast. When Ries asked him about Johnsen’s hiring, here’s how the blogger responded “In fact, having a strong opinion about Sarah Palin, but being willing and able to see the broader appeal of the show and options for creating content and promoting opportunities for engagement to different groups was a key reason we hired her. Whatever political views she, or anyone else, might have won’t be present in our efforts. That’s a big part of this.”

It’s nice to know bipartisanship exists somewhere…even (or especially?) if that somewhere is SPALASKA!