Selma Director on LBJ Criticism: ‘I Wasn’t Interested in Making a White-Savior Movie’ 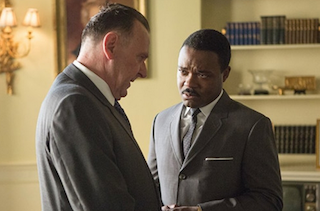 With Selma expanding into wide-release this week, director Ava DuVernay spoke to Rolling Stone about the criticism her film is receiving from certain circles when it comes to the portrayal of former President Lyndon B. Johnson in relation to Dr. Martin Luther King, Jr. and the Civil Rights Movement.

The controversy began in earnest when former Johnson Administration domestic affairs chief Joseph A. Califano, Jr. penned an op-ed for the Washington Post in which he claimed the film “falsely portrays President Lyndon B. Johnson as being at odds with Martin Luther King Jr. and even using the FBI to discredit him, as only reluctantly behind the Voting Rights Act of 1965 and as opposed to the Selma march itself.”

“In fact, Selma was LBJ’s idea,” Califano, Jr. continued. “He considered the Voting Rights Act his greatest legislative achievement, [and] he viewed King as an essential partner in getting it enacted.”

Responding to that and similar criticism to Rolling Stone, DuVernay said:

“Every filmmaker imbues a movie with their own point of view. The script was the LBJ/King thing, but originally, it was much more slanted to Johnson. I wasn’t interested in making a white-savior movie; I was interested in making a movie centered on the people of Selma. You have to bring in some context for what it was like to live in the racial terrorism that was going on in the deep south at that time. The four little girls have to be there, and then you have to bring in the women. So I started adding women.

This is a dramatization of the events. But what’s important for me as a student of this time in history is to not deify what the president did. Johnson has been hailed as a hero of that time, and he was, but we’re talking about a reluctant hero. He was cajoled and pushed, he was protective of a legacy — he was not doing things out of the goodness of his heart. Does it make it any worse or any better? I don’t think so. History is history and he did do it eventually. But there was some process to it that was important to show.”

She did go on to admit that many other presidents could not have passed the Civil Right Act, “or wouldn’t have even if they could.”

Read the full interview at rollingstone.com.