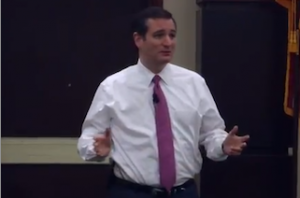 Speaking before a crowd at a meeting of Tea Party group FreedomWorks this weekend, Senator Ted Cruz (R-TX) laid out exactly how the Senate’s gun background checks compromise died. From Cruz’s perspective, it was the letter he sent, along with Senators Rand Paul (R-KY) and Mike Lee (R-UT), threatening to filibuster any gun control legislation that ultimately doomed the bill from passing.

Cruz began his speech by telling the FreedomWorks members in attendance that their ideology is “winning” in Congress. As an example, he pointed to the recent debate over gun control, specifically the background checks compromise from Senators Pat Toomey (R-PA) and Joe Manchin (D-WV) that failed to garner enough votes earlier this month.

“A month ago in Washington D.C., guns was a done deal,” Cruz said. “The president was out there every day, pounding on it. Taking grieving moms and dads who tragically lost their babies and treating them as political props.” He then essentially took credit for stopping the “momentum” on the issue by sending that threatening letter to Senate Majority Leader Harry Reid (D-NV). Because of that letter, Cruz said, his fellow Republican senators were forced to face their constituents who were asking, “Why aren’t you standing up for the Second Amendment? If these guys are fighting, what are you doing?”

Cruz went even further in his speech, belittling his more moderate Republican colleagues who were at least open to having a public debate on the issues. “Here was their argument,” Cruz said of his fellow Republicans in the Senate. “They said: ‘Listen, before you did this, the politics of it were great. The Democrats were the bad guys. The Republicans were the good guys. Now we all look like a bunch of squishes.’ Well, there is an alternative,” he said he responded. “You could just not be a bunch of squishes.”

While Cruz did cast himself as hero in the fight to “protect the Second Amendment” and block any efforts to expand background checks, he also offered praise to his Tea Party constituents. He called the “involvement” of the American people in pressuring their senators “critical” to the eventual outcome. Thirty years ago, he said the big three networks, ABC, CBS and NBC “determined what was news and what wasn’t.” But now, he concluded, groups like FreedomWorks are able to “focus the attention of the American people.”

Watch video below, via FreedomWorks: