Senate Dem Speaks For Hours Against Gorsuch, But It Isn’t a Filibuster

Senate Dem Speaks For Hours Against Gorsuch, But It Isn’t a Filibuster 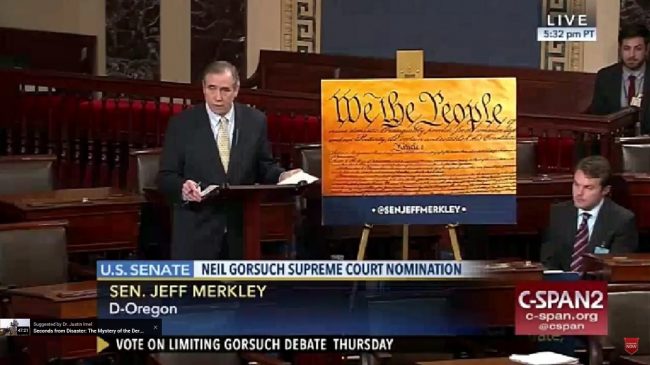 Senator Jeff Merkley of Oregon started a “marathon speech,” as The Washington Post put it, against the Supreme Court nomination of Neil Gorsuch on Tuesday evening at just before 7 pm ET. As of 10 am ET on Wednesday, the Democrat was still speaking.

“I plan to keep speaking for quite a while longer, as long as I’m able” #StopGorsuch #HoldTheFloor

At one point, Merkley asserted that “to proceed to fill this stolen seat will damage the court for decades to come.”

Merkley blasted his Republican colleagues for refusing to consider the nomination of Merrick Garland by former President Barack Obama.

The majority in this chamber decided to steal a Supreme Court seat,” said Merkley from the floor of the Senate. “Again, such a theft has never, ever happened in the history of our nation.

The senator also blasted the “warfare tactic” of blocking Garland from the Supreme Court.

However, as the Post detailed in a separate Wednesday article, the Oregon politician’s extended speech is not a filibuster. The newspaper pointed out Senator Majority Leader Mitch McConnell, “knew his colleagues in the minority were going to filibuster Gorsuch — either by actually talking, like Merkley is, or threatening to talk…So before anything began, McConnell filed a motion to vote to end that debate.”

Thank you for your support as I held the floor for the past 15.5 hours. I won’t stop fighting for our #WeThePeople democracy. #StopGorsuch