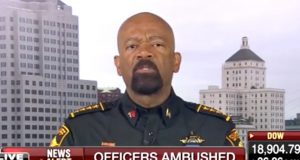 Last week, the quickly-transitioning Trump administration added a divisive piece to his altering puzzle: Senator Jeff Sessions, the Alabama politician who has been a fervent support of Donald Trump‘s since early in the primary process. Sessions was a frequently-cited source of counseling by Trump this year, and his loyalty paid off with the appointment of Attorney General.

It’s a move that has caused a lot of controversy in the days since, with people digging into Sessions’ past to reveal — in the opinions of many — an alarming history of questionable comments regarding African Americans and incidents of alleged racism.

But not so fast says Sheriff David Clarke, the controversial conservative Milwaukee law enforcement professional who spoke on Trump’s behalf at the Republican National Convention this summer in Cleveland.

“All we’re hearing is that maybe thirty years ago he may have made some racially insensitive remarks. What do you make of this?” Fox Business host Stuart Varney asked Clarke on Monday.

Clarke responded, “Well first of all you won’t find a more fair and a more qualified… person than Senator Jeff Sessions.”

“I’m tired of this race card thing,” he continued. “The left is out of legitimate excuses for wanting some kind of dialogue about somebody… It’s an automatic default from the left to call somebody a racist.”

Sheriff Clarke also said that the appointment of Jeff Sessions as Attorney General is “a good step towards law and order,” noting that he has known the Alabama lawmaker for quite some time. “He doesn’t have a racist bone in his body,” Clarke continued.

Watch above via Fox Business.