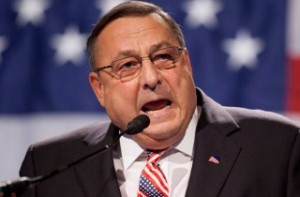 In the least surprising admission since Shaggy finally ‘fessed up that it was, indeed, him, Maine Governor Paul LePage has come clean about the poorly-hidden meaning behind a self-evidently racist remark he made several weeks ago.

Addressing reporters about the epidemic of drug addiction afflicting the region, LePage made the following observation about certain types of drug dealers, and the white girls they impregnate:

“The traffickers — these aren’t people that take drugs. These are guys with that are named D-Money, Smoothie, Shifty, these types of guys, that come from Connecticut and New York. They come up here, they sell their heroin, they go back home. Incidentally, half the time they impregnate a young, white girl before they leave, which is a real sad thing because then we have another issue we that we’ve go to deal with down the road.”

LePage would later deny that the remark was racist at all, specifically pointing to the fact that he “never said they were black!”

During a radio interview Tuesday, LePage said they were black:

I had to go scream at the top of my lungs about Black dealers coming in and doing the things that they’re doing to our state. I had to scream about guillotines and those types of things before they were embarrassed into giving us a handful of DEA agents. That is what it takes with this 127th.

File that, not just under “obvious,” but under “Things to Remember Next Time Someone Tries to Deny Their Own Coded Racism.”