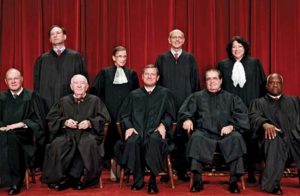 Anyone who has followed Slate legal columnist and editor Dahlia Lithwick‘s storied career knows that she is a hack for liberal causes. Not that there’s anything wrong with that; some of my best friends are hacks. But she’s an embarrassing hack. Her columns are so often full of holes, fallacies, and factual errors, they typically aren’t worth pointing out (although I will always treasure the Patterico blog post which persuasively argued that Lithwick wrote an entire piece bashing a judge’s opinion without actually reading it).

But this was too juicy to pass up: within the span of only two weeks, Lithwick managed to articulate two completely different views on the same subject. What’s more, her justification for the turnabout was nakedly partisan.

In October, Lithwick wrote a column entitled “Eight Is Not Enough,” the premise of which was that Republicans were doing serious damage to the Supreme Court by refusing to consider President Barack Obama‘s nomination of Merrick Garland to the highest court in the land. “Senate Republicans believe the Supreme Court will be just fine permanently operating one justice down,” she lamented, saying Chief Justice John Roberts had a responsibility to tell them otherwise.

What can John Roberts say? It’s almost painfully simple. He can say, in the most sober, measured, and nonpartisan fashion that the court needs nine justices. He can note that although the court began with six justices—and from 1863 to 1866 had 10—the Judiciary Act of 1869 stipulated that the court be made of nine justices. He can note what happened to FDR when he attempted to pack the court in 1937 and observe parenthetically that this revolt came from the American public. He can also point out that fluctuations in the authorized strength of the court came with changes in the circuit courts, not recreational obstruction in the Senate.

“…Allowing the court to dwindle to eight or even seven members as a result of bare-knuckled obstruction would so undermine the legitimacy of future rulings and someday justices that the court might not ever recover,” she warns. So the Court needs nine members, and the Senate can’t and shouldn’t obstruct that ninth pick. I think you can see where this is heading…

Along comes President Donald Trump. Now, Lithwick insists that Democrats have a duty to obstruct Trump for his entire four-year term and filibuster any Supreme Court nominee he puts forward. Turns out eight justices is enough:

The current Supreme Court vacancy is not Trump’s to fill. This was President Obama’s vacancy and President Obama’s nomination. Please don’t tacitly give up on it because it was stolen by unprecedented obstruction and contempt. Instead, do to them what they have done to us. Sometimes, when they go low, we need to go lower, to protect a thing of great value.

Nothing says your position has the moral high ground like “we need to go lower,” right? Or how about Lithwick openly telling the Democrats to lie to the American people? “We will lose. But that’s not the point now. Democrats need to repeat Ted Cruz’s lie that eight justices will suffice.”

Had Lithwick said two weeks ago that the Republicans needed to appoint Garland because she wanted a liberal majority on the Court or because Obama had a “right” to a nominee, I wouldn’t be writing this column. But she didn’t. Instead she framed her objections as purely nonpartisan, procedural, practical, and above the fray. Not nominating Garland damaged America, it was an affront to democracy, it was obstruction, it was unjust.

Now we learn that was a lie. Lithwick didn’t care about any of that, she just wanted to further her side’s agenda. And to that end, she is now openly telling her party to take an action she believes damages the stability of the United States judiciary for the sake of what amounts to a toothless temper tantrum.

Here’s the thing: Democrats and Republicans alike are both guilty of the obstruction of judicial picks when out of power, but they at least have the decency to dress up that obstruction behind facades. For Samuel Alito, Democrats dug up some case he should have recused himself from sixteen years earlier to filibuster a nominee basically every neutral observer agreed was qualified. For Garland, Republicans pointed to the scarcity of Supreme Court nominations in election years, a hitherto unheard-of objection.

Say what you will about the Republicans’ rather transparent obstruction of Garland, the arguments they chose to forward won’t make them hypocrites come January. They argued the next president should choose the next Supreme Court justice, and now he will. Democrats will have a tougher time of it; their arguments were loftier, that blocking Garland was “disrespecting the Constitution,” that they the GOP was “undermining the Supreme Court.” Like Lithwick, they claimed to be above politics, making it all the more awkward for them in the coming years when they inevitably embrace their position as the new obstructionists.

But Lithwick isn’t even bothering with excuses any more. She argues that the Democrats should obstruct Trump’s nominees, because f**k you. “The only way to answer nihilism is with nihilism of our own,” she argues. Something tells me that won’t be a winner in the court of public opinion.

Again, I don’t care if an opinion columnist is a hackish hack writing hacky things; that’s our job sometimes. But at least be a good one.