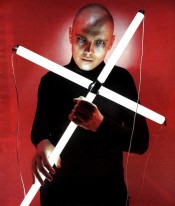 Is Smashing Pumpkins lead singer Billy Corgan trying to get into politics or perhaps auditioning for a leadership role in a right-wing conspiracy group? Because judging by the current political temperature his latest blog post might make for a quick entree into the world of birthers and death panelists. That said, one supposes it was only a matter of time before someone made the leap from Glenn Beck’s sort of assertion that the Government is looking to create swine flu concentration camps to the idea that swine flu is part of some Barack Obama conspiracy. This from Corgan’s blog.

I have friends that have gotten the swine flu. All of them told me they felt very, very sick, and that it was awful. So I’m not in any way suggesting that the H1N1 virus is not real…I would suggest however that it is possible the virus is not a naturally occurring virus. I have read reports from people who say (as doctors) that there is evidence to suggest this virus was created by man; to call it Swine Flu is then a misnomer, as it really is Swine Flu plus some other stuff stitched together. These doctors said such genetic mutation was impossible in nature.

Why might a man create a swine flu virus?

I say ‘propaganda’ because, in my heart, there is something mighty suspicious about declaring an emergency for something that has yet to show itself to be a grand pandemic. Our American President Obama has declared a national emergency about this virus, which he in his own words said was, at this point, a preventative measure. So, why declare an emergency if there isn’t one?…in our fear, we attract the worst, and, in conjunction with that, how those fears are used by others without integrity to try to create a power against Us to promote discomfort and dis-ease.

Ah yes, the power of fear in political matters! Also, there is a bunch of stuff about mandatory vaccinations. Not to rain on Corgan’s swine flu truther parade, but so far the vaccine has only been made mandatory for some U.S. health-care workers (who aren’t necessarily happy about it), but not for the general public. Even if it was — and if it was, you would have heard a much louder outcry long before now — there is not enough to go around, meaning that among other things by declaring this a national emergancy Obama may have actually made his life more difficult. In a sort of related side note, some what more grounded in reality, many New York City parents are apparently opting out of swine flu vaccinations.