Is Sesame Street At War With Fox News?

Is Sesame Street At War With Fox News? 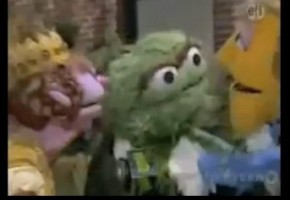 A writer at the conservative entertainment blog Big Hollywood has divined a new threat to Fox News. Rising from the cooling embers of the White House’s “War on Fox” comes a foe the likes of which the world has never seen: Sesame Street.

That’s right, Big Hollywood is sounding the alarm, and the panic is spreading like Big Bird’s feathers in a windstorm. The controversy surrounds a 2 year old clip from the educational programming mainstay in which a muppet makes a crack about “Pox News.” If you think that’s funny, you’ve got to read it to believe the lather this guy works himself into over this.

And here’s a little bit of what “Stage Right,” a pseudonymous “veteran of the Broadway theatre industry,” has to say:

Later in the episode, Anderson Cooper from 4th place CNN, guest stars as a reporter for GNN. He interacts with “Walter Cranky” and “Dan Rather-Not” — Muppets representing real-life liberal news personalities — and they talk about “Meredith Beware-a” and “Diane Spoiler.” But no affectionate nicknames for Fox News personalities; no Spill O’Reilly or Brittle Hume — nope, and the only disparaging characterization of real-world news is reserved for Fox: Fox is a POX.

Awww, did somebody hurt your feewings?

All year, I’ve been noticing this increasingly whiny trend among conservatives, and this episode is an absurd encapsulation of that. The pattern is always the same: conservative blowhard says something horrible about someone, who then pushes back, causing tears.

Rush Limbaugh kicked off the Obama Presidency by telling anyone who would listen that he hoped the President would fail, and that he wasn’t going to “bend over and grab the ankles” just because Obama is black. The DNC pointed out that Republican leaders bowed and scraped for Rush, and raised money off of it. The conservative response was to claim that Rush was being attacked.

Then, there was CNBC’s Rick Santelli, remember him? He’s the guy who first invoked the need for “a new Tea Party” as he ranted about “loser” homeowners and their extra bathrooms. White House Press Secretary Robert Gibbs called him out in devastating fashion, at which point Santelli accused the White House of “threatening” him.

Finally, there’s the much-hyped “White House War on Fox News.” Here’s a quick review: Fox News not only went after Barack Obama relentlessly during the 2008 campaign, they also attacked his wife. After a summer of provocations like the ouster of Van Jones and the smearing of Kevin Jennings, the White House responded, wisely or not. Once again, the attacker played the victim, then inflated a claim of escalation that led to the supposed truce. Now, every time the White House pushes back against a news story, they’re accused of setting their sniper scope on new quarry.

And now, the right is playing victim to a puppet. I have to be honest, I expected more toughness out of this bunch. If it makes them feel any safer, though, I’m pretty sure Fox News and Sesame Street have already formed a truce. 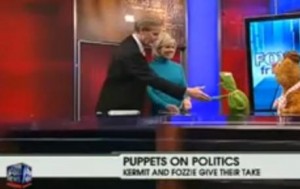