White House Dinner ‘Party Crashers’: Help From The Inside? 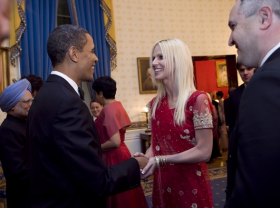 The latest development in the saga of the polo-playing, dove-throwing socialites who crashed the first state dinner of the Obama administration is something that we suggested yesterday: Michaele and Tareq Salahi may have had help from the inside.

Gawker is reporting — with photo evidence — that the Salahis are “polo buddies” with an influential state dinner guest, Indian Ambassador Arun Singh. Whether it turns out to be this specific connection or another (they have a lot of powerful friends), it makes a lot more sense that they had a helping hand into the White House than that the Secret Service got conned by would-be reality show contestants.

As the NYT reported yesterday, Bravo has now confirmed that a TV crew for the upcoming “Real Housewives of DC” was indeed trailing the Salahis, who told the crew that they were invited to the dinner. The Salahis are set to appear on “Larry King Live” on Monday to tell their side of the story. Through a lawyer, they deny “crashing” the event, so look for them to explain how they were left off the guest list, but were added to the White House clearance list. 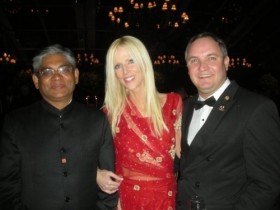 What struck me was the Secret Service’s response. When I talked to spokesman Ed Donovan yesterday, he was quick to accept responsibility for the incident, even though no investigation has been completed. (Secret Service director Mark Patterson told Politico that they were “deeply embarrassed” — especially since it’s been confirmed that the couple met the President and Mrs. Obama on the receiving line). Neither he nor the White House could confirm or deny that someone within the White House had interceded on the Salahis’ behalf, and both have pointed out repeatedly that the couple were subject to the same physical security measures as the other guests.

While it seems counter-intuitive that the Secret Service, already under fire for cutbacks, would take the blame for this if it wasn’t really their fault, the alternative is arguably worse. It’s fairly simple to mitigate a relatively harmless, isolated slip-up.

On the other hand, the idea that the vapid, privileged stars of a reality show could be waved through security and into the White House would not play well with recession-battered Americans (or with luminaries who couldn’t score an invite), and the security implications of the People’s House becoming the brass ring of D-list prankdom are also far-reaching.

The possibility that the Salahis were admitted at the request of a foreign diplomat is just gravy on top of the red meat.

What also amazes me is the credulity with which the media reported this story. As Gawker puts it, “the Salahis weren’t just some randos who showed up at the White House and schmoozed their way past the Secret Service with their fancy clothes.”

Yet that’s pretty much how it has been reported. Perhaps the pop culture appeal of the moxie-laden gadabout who skirts the velvet rope was too powerful a lure to resist.

Update: Report from NBC Nightly News about how the Salahis got through that first checkpoint, and how they met President Obama.


Photo of the Salahis with Ambassador Singh from Gawker.com