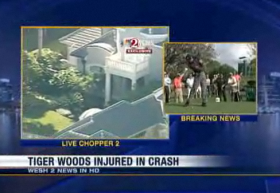 Breaking news on Black Friday: This afternoon, news broke that golfer Tiger Woods had been injured in a car accident early this morning near his home in Florida. The reports quickly zoomed through Twitter, with questions about whether he’d been “seriously injured” (as early reports suggested) or had been drinking (as driving slowly and hitting a fire hydrant and a tree suggested). He is, and was, neither: According to his agent he is “fine” though he has suffered facial lacerations; also, great pains have been taken to get the word out that alcohol was not involved. Updated report from WESH.com from Channel 2 Orlando:

News has learned that golfer Tiger Woods was injured when he hit a fire hydrant and then a tree outside his Isleworth home early on Friday morning.

The Florida Highway Patrol said Woods was injured in the crash, which took place at about 2:30 a.m., and was taken to Health Central Hospital….

Woods was driving a 2009 black Cadillac Escalade when he lost control and hit a fire hydrant outside his home and a tree outside his neighbor’s home, FHP said.

FHP said the crash is still under investigation. It said alcohol did not play a role in the crash, but that charges are pending.

No doubt people will be filling in the blanks themselves until details emerge (Cadillac escalade, 2:30 a.m., charges pending — the “charges pending” part is the eyebrow raise. To see a few of those eyebrows go here and here and here and here). For those details and more you can surely find them on Twitter, where “Golfer Tiger Woods” has been trending pretty much since the news broke, or, as Newsweek did, from Mediaite columnist personal blogs (we kid, we love the Newsweek Tumblr). Probably quicker than going to MSNBC, which, as Brian Stelter reported on his Twitter, was way behind Fox, CNN and ESPN (ESPN being last of those three). Glad Woods is okay; we’ll post updates when they are available. Video report from CNN’s Ali Velshi below.

Update: According to the Windermere, Florida mayor, Woods has been released from the hospital. That video is below, too.