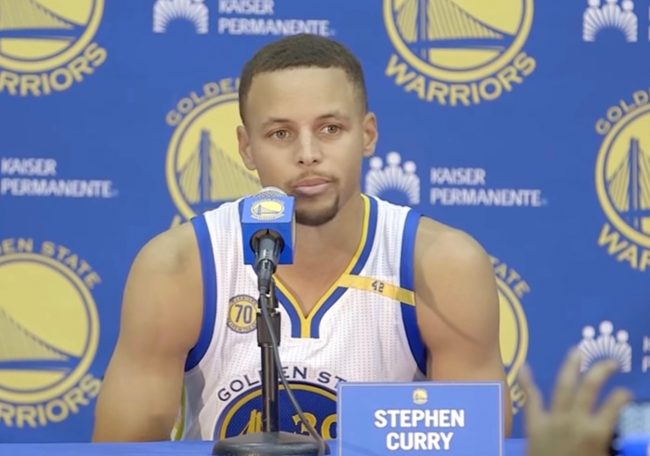 Golden State Warriors superstar Stephen Curry was highly critical of Under Armour CEO Kevin Plank for calling President Donald Trump a “real asset” to the country during an interview with CNBC.

“I agree with that description,” Curry told the Mercury News, “If you remove the ‘et.’”

Curry, who is sponsored by Under Armour, said that he would have no problem severing ties with a brand whose leaders, he felt, did not share his “core values.”

If there is a situation where I can look at myself in the mirror and say they don’t have my best intentions, they don’t have the right attitude about taking care of people, if I can say the leadership is not in line with my core values, then there is no amount of money, there is no platform I wouldn’t jump off if it wasn’t in line with who I am. So that’s a decision I will make every single day when I wake up. If something is not in line with what I’m about, then, yeah, I definitely need to take a stance in that respect.

Under Armour released a statement in which they said “we engage in policy, not politics.” Curry said he was pleased by the statement, and planned to continue his relationship with the company.

“Based off the release that [Kevin Plank] sent out this morning, and what he told me last night, that’s the Under Armour that I know,” Curry said. “That’s the brand I know he’s built and one that, as of Wednesday afternoon, is something that I’m standing on.”