The Billy Goat Of Politics: IRS The Latest To Target A Faceless, Leaderless Tea Party

The Billy Goat Of Politics: IRS The Latest To Target A Faceless, Leaderless Tea Party 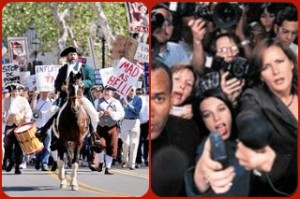 The Chicago Cubs haven’t been to a World Series since 1945.

Some blame the Curse of the Billy Goat. As the old legend goes, a Chicago resident was once kicked out of a 1945 Series game between the Tigers and Cubs due to a formidable scent emanating from his pet goat. The man (Billy Sianis, owner of the Billy Goat Tavern) was so furious of the removal; he cursed the team, vowing they’ll never win again.

Almost 70 years later, despite having ample payroll and one of the most loyal fan bases in baseball, the Cubbies haven’t returned to baseball’s biggest stage. In 2013, “Just wait ‘till next year!” has already arrived at Wrigley Field, as the team currently sits in last place with little reason for fans to believe the lovable losers can make a run at the pennant.

Since baseball (and Seinfeld) can be connected to any situation in life, it’s completely appropriate to say the Billy Goat is much like the Tea Party: Both get blamed for calamitous events each have absolutely nothing to do with. And much like the infamous goat, the Tea Party seemingly has no voice to defend itself when being held responsible for everything from the death of innocents to DC gridlock.

The Gabby Giffords shooting? It must have happened because of the “declining discourse” and “edginess” brought about by Tea Party rallies…or so said DNC Chairwoman Debbie Wasserman-Schultz at the time, a tale given legs by advocacy media outlets and other Democrats, who by reflex extended the blame to Sarah Palin. Of course, it turned out the guilty party (Jared Loughner) had a reading list that included The Communist Manifesto by Karl Marx, Hitler’s Mein Kampf, and One Flew over the Cuckoo’s Nest. Not exactly page-turners on the Tea Party best-seller list. In fact, Loughner didn’t even vote in the 2008 Presidential election. No matter…left-leaning media got plenty of miles out of it before the accusation was debunked.

How about the Aurora movie theatre massacre? Ah-ha…accused shooter James Holmes reportedly was said to be a member of the Tea Party, at least according to ABC’s Brian Ross. So how did the veteran newsman come to this conclusion shortly after the rampage?

From Ross’s report right after the shooting:

The “…we don’t know” disclaimer is irrelevant here: the genie is already out of the bottle. As they say in the business, we don’t know what we don’t know. But that rule didn’t prevent Ross from putting the Tea Party connection out there. After some major blowback when the facts came to light, Ross issued a correction. Too little, too late…

Last month, the Boston Bombings were carried out on Patriots Day and Tax Day and at the site of the original Boston Tea Party back in 1773. On cue, the connection to the modern-day tea party was made almost immediately.

After all, we have symbolism and themes to help arrive at a possible verdict…or so Chris Matthews predictably speculated on the air right after the attacks.

“(It’s) tax day today. That came up. You know, I was thinking of all the iconic events that are being told about today. Of course I knew it was tax day because I got them in. But of course, it’s Patriots Day. It’s also the Boston Marathon. And would you as an expert be thinking domestic at this point? I don’t think tax day means a lot to the Arab world or Islamic world or certainly not to al Qaeda in terms of their world. It doesn’t have iconic significance.”

In baseball terms, the blame-the-Tea-Party-for-deadly-acts-of-violence crowd would be 0-for-3. But rest assured, they’ll keep trying.

Fast forward to news over the weekend that the IRS has targeted conservative groups and basically anyone advocating smaller government (See: the Tea Party Express) over the past two years. Just call it conservative profiling.

As expected, right-leaning media is having a field day with this story. And why not? It combines everything they’ve warned the American public about over the last five years since Mr. Obama took office: Bigger government, more intrusion, constitutional rights violated, and specific groups being scrutinized for political purposes/revenge. Everything and everyone from Fox News to Glenn Beck to Sean Hannity to Mark Levin (who was also targeted) must feel like they’re on the world’s greatest Peyote right now. After all, they just were handed three weeks to three years’ worth of red meat to work going into the midterms and 2016.

And through all the accusations is the faceless, voiceless Tea Party. What? It has leaders? Really? Go ask your friends or family who the current head of the Tea Party is (and no Googling for those playing along at home). Who is the official spokesperson? Who is the John Sununu-esque bulldog it sends out to debate its adversaries on cable news?

In other words, when these kinds of charges—Giffords, Aurora, Boston—are levied against the Tea Party, who from the Tea Party is there to defend its honor or even go on the offensive after the accusations are proven false, as they always are?

The answer is no one. Sure, Ms. Palin will issue a statement defending the Tea Party or do a speech here and there on its behalf. But outside of the hard right and its media, it’s safe to say the former VP candidate is taken as seriously as the Cubs right now.

As a result, the Tea Party is somehow a hybrid of a powerful force and a rudderless ship. And from a public image perspective (at least among some independents and everyone on the left) the party has been successfully characterized as an extreme entity…all thanks to being blamed for past events it had no association with. Consequently, the Tea Party’s popularity has fallen to an all-time low.

The old saying is that you can’t put the toothpaste back in the tube. This certainly applies to the Tea Party…

It may be a formidible movement that (in its most basic form) advocates balanced budgets, smaller government and economic growth via lower taxes…

But it’s also the first choice of some in the media and politics for being a domestic terror organization whenever a horrific event hits.

The IRS is targeting the Tea Party?

Been there, done that.

After all, it’s not like it isn’t used to being a political piñata already…