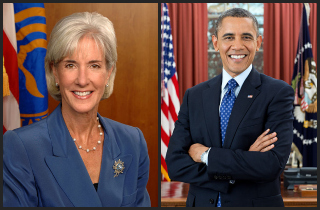 From disastrous interviews with Jon Stewart and Sanjay Gupta to a lethal SNL cold open, one could argue Health and Human Services Secretary Kathleen Sebelius is having the toughest week in politics since Dan Quayle failed a spelling bee back in 1991.

But given the debacle (her word) that is healthcare.gov and the horror stories of lost policies, higher premiums and higher deductibles emerging in droves around the President’s signature legislative achievement that is the (Un)Affordable Care Act, this goes far beyond adding an “e” to the word potato. Sebelius is now the face of what will likely be the last large government program embarked upon in at least a generation.

But why is that, exactly? Why is Sebelius out there served up as a human piñata on Comedy Central and CNN, and answering all of the brutal (but fair) questions in hearings on Capitol Hill today?

Why is the President allowing such a loyal soldier to be left out there to defend the indefensible? Trying to justify almost anything as it pertains to Obamacare—especially that whole “If you like your current plan, you can keep it” thing now being played on cable news more than Miley’s twerking last month—is like trying to defend Bernie Madoff. It’s a thankless, impossible job. Still, Sebelius did something we haven’t seen this President do since the October 1 launch of Obamacare: Take full responsibility.

“Hold me accountable for the debacle,” Sebelius said during the contentious hearing. “I’m responsible.”

Of course, the President has no issue doing press conferences during the government shutdown. After all, it allowed him to do two things he particularly excels at: (A) Speak without interruption or being challenged for long periods of time and (B) Demonizing his opponents, just like the good old days on the campaign trail.

But campaigning is obviously much different than governing. One requires simply talking a good game, and there’s nobody better at this than the President outside of Vince Offer. The latter requires execution.

In the past, if sound execution wasn’t achieved, Mr. Obama would simply blame Republicans for blocking his efforts or screwing things up. From there, many in the press would run with the victim narrative, even carrying it so far to blame impediment of government programs such as Obamacare not on principle, but racism. It’s what people do when they know they’re losing on the merits of an argument: Get emotional, set race relations back 50 years, juice ratings with a cheap and dirty argument around race…lather, rinse, repeat.

What we’re seeing here—and this is without hyperbole—is effectively the end of the Obama Presidency. Why? Because this story, this law–since it affects so many people, particularly financially–has the kind of legs in the media that will extend in some capacity all the way to 2016. ITo that end, it’s also the end of the love affair from the usual suspects in the press. Unlike other recent scandals, that’s how deep this goes.

Because deep down in places they don’t want to talk about at parties, Mr. Obama has already served his purpose: He won two elections. He weakened the Republican brand, particularly the Tea Party. Most importantly, he set the table for Hillary in 2016, who will now be forced to defend government-run healthcare, which she was charged with creating during her husband’s presidency before essentially getting laughed out of the room by even members of her own party after seeing her proposal.

So when will the President hold a press conference to assure the American public—where millions are now being kicked off their health plans or paying more—that he has a strategy moving forward to fix this catastrophe? When will he sit down with a credible journalist like, say, a Scott Pelley, a Chris Wallace, an Anderson Cooper, a Diane Sawyer and actually provide some answers?

In the meantime, the President plans to campaign for Democratic Gubernatorial candidate Terry McAuliffe in Virginia this weekend. So will Joe Biden, who once thought the Affordable Care Act was a “big f***ing deal”. A member of the press could find Eddie Snowden faster than the Vice President these days.

Back on the campaign trail goes the President.

All while his Presidency—and his legacy—is on a trail to disaster.