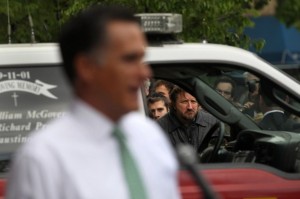 In May, supporters of Republican presidential candidate and former Massachusetts Governor Mitt Romney decried the mainstream media for focusing on a Washington Post piece that broke news of the candidate’s youthful pranks, including a penchant for impersonating a police officer. Now, conservative website The Daily Caller has dug up two more tales of odd Romney pranks, these involving dressing up like a fireman and a Prohibition-era gangster.

The Daily Caller‘s Hal Libby interviewed Michigan clothing store owner Ben Shaw, who told him about two incidents from 1962 or 1963, the first of which involved Romney and three of his friends performing a mock stickup dressed in gangster regalia, brandishing toy Tommy guns. The second story he told was really strange:

As holiday business picked up, Shaw kept the store open until 9:00 p.m. during the week, he said, and routinely received truck shipments around closing time.

So when he heard a “loud banging” on the metal delivery door in the back of the shop as he was preparing to lock the front door, he thought it was just another late-night delivery.

But when Shaw opened the door, he explained, he suddenly stood face-to-face with Mitt Romney “in full Bloomfield Township fireman’s regalia.”

“He had on the waterproof cape, the fire helmet, and he was carrying a bona fide fire ax,” Shaw told TheDC, and barged into the store screaming, “Where’s the fire? Where’s the fire?”

The costumed Romney paraded through the store — all the while yelling about a nonexistent fire while swinging the ax over his head — and walked out the unlocked front door. And as quickly as he had barged in, he vanished.

There are several obvious reactions to this, chief among them being “Damn, that’s weird!”

However, it’s important to remember that this happened a long time ago, when people thought different things were funny. Maybe the humor is just lost in translation.

There’s also the political irony of Romney slamming President Obama for wanting to put more police and firefighters back to work, while harboring a history of dressing up as them. It makes you wonder if Romney’s plan for public service in America is just to hand out uniforms to random people. Maybe he’s got an ICE uniform you can wear while you self-deport.

More fascinating than that, though, is the fact that the rest of the media seems to have missed this story. At a minimum, you would expect to have seen Lawrence O’Donnell wondering, in his “Rewrite” segment, wondering which of The Village People Romney would be dressing up as next. Perhaps O’Donnell doesn’t read The Daily Caller.

The story also appears to have escaped the notice of the same right-wing media that crucified The Washington Post for publishing a so-called “hit piece” on Romney’s younger days, even though the bulk of the WaPo profile was devoted to fawning puffery. Now, The Daily Caller does a two-page post devoted entirely to weird Romney pranks, and they make not a peep.

Even more interesting, though, is the fact that the Romney campaign confirmed the essential elements of the story:

A Romney campaign spokesperson did not dispute the story, but said Romney was not armed with a toy Tommy gun in the “massacre.”  The spokesperson also said that for his second prank, Romney was carrying a fire hose — not an ax.

The Romney campaign chose not to comment for The Washington Post when they were working on their Romney School Daze story, but elected to do so for The DC, even though their comment wasn’t at all helpful to their candidate. It seems the Romney campaign has a clear idea of who they need, and who they don’t need, and their decision to give Hal Libby a comment speaks volumes about his site’s influence with them.