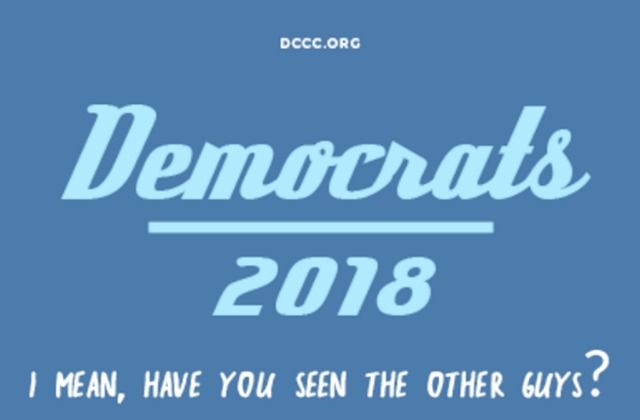 The Democratic Congressional Campaign Committee is looking for a new sticker as we approach the 2018 elections and they want your help. If one goes to the official DCCC website, they have the option of voting for new slogans that include, “Resist & Persist”, “She Resisted, We Persisted” (whatever that means), and “Make Congress Blue Again” (actually not a bad spoof on the President’s campaign slogan).

But, as if the request itself or the choices provided was not enough to draw mockery from the right, the final option to earn your vote provided by the DCCC actually says “Democrats 2018 – I mean, have you seen the other guys?”

That horrendous attempt at humor opened the door for some fabulous attempts at humor and the Twitterverse did not disappoint:

vote for the next @dccc sticker pic.twitter.com/LCJ122f938

This is better than any of those awful @dccc stickers, send me money instead pic.twitter.com/OeyROJoK6I

Not really feeling the new stickers from the democrats tbh. pic.twitter.com/9DOck5KQbI

not sure how i feel about the new dccc stickers… pic.twitter.com/PUzOGGVuyL

Vote for us or you are literally Hitler #DCCCStickerIdeas

Because us rich coastal city dwellers know better than everyone else in the country. #DCCCStickerIdeas

Trying to sabotage elections is bad unless we’re the ones doing it. #DCCCStickerIdeas

Vote for us, you racist misogynistic homophobe!

“At this point, what difference does it make?”#DCCCStickerIdeas

Everything we agree with is settled science. #DCCCStickerIdeas