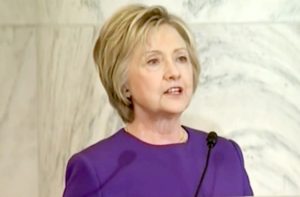 I fear I may have been the victim of persistent auditory and visual hallucinations throughout the election. After all, I’m pretty sure I heard Democratic presidential candidate Hillary Clinton promise– not once, but several times over the course of many months– that she would accept the results of the 2016 presidential election.

I then seem to recall that after her loss to Donald Trump, she followed through on that promise. “We must accept this result and then look to the future,” she said (or did she?). “Donald Trump is going to be our president. We owe him an open mind and the chance to lead.”

But I find that hard to reconcile with what I’ve seen since then: namely, Clinton and her campaign doing everything in their power to delegitimize Trump’s victory and work towards getting the results of the election overturned.

First, it was the quixotic attempt by Green Party candidate Jill Stein to challenge the results of the election in three states, which would’ve then handed Clinton the election. The Clinton campaign should have been content to let Stein defraud hapless supporters out of millions of dollars on behalf of a recount doomed to fail. But instead, the Clinton campaign announced that they were joining the effort.

Then there was the Clinton campaign’s statement Monday, announcing that they were backing efforts for members of the electoral college to receive intelligence briefings about the government’s conclusion that Russians hacked the DNC in an effort to elect Trump. “Electors have a solemn responsibility under the Constitution and we support their efforts to have their questions addressed,” said campaign chairman John Podesta. Again, the request comes at the same time that Clinton supporters are calling on electors to ignore their state’s results in order to stop Trump.

You can see why I’m questioning my own sanity: the Clinton campaign’s stance is all over the map. They aren’t contesting the election… but they do support a recount? They put out a statement saying they believe it’s mathematically impossible for them to win… but they think it’s worth spending millions for voters learn exactly how much they lost by?

The Clinton statement clarifies that “we feel it is important, on principle to ensure our campaign is legally represented in any court proceedings and represented on the ground in order to monitor the recount process itself.” Huh? On what “principle”? Why have no other presidential candidates in history identified this amorphous “principle” that requires them to join unserious third-party efforts to overturn their opponent’s victory?

Everyone knows that the only conceivable reason an elector would want to see the intelligence before voting is to decide whether they should ignore the will of their state’s voters and vote against Trump. But Clinton already conceded the election: “we must accept this result,” remember? Why would Clinton back an effort with the sole purpose of overturning a result she supposedly accepts?

This is not merely about hypocrisy, although there’s plenty of that. No, this is about cowardice. Clinton and her campaign are taking overt and targeted actions to try to have the results of the election overturned, all while lacking the decency to come out and say so. At the same time, they’re studiously avoiding media interviews where they could be pressed on their actions.

(For what it’s worth, I don’t think the Clinton campaign actually believes their recount/electoral college efforts will be successful. I think they realize that delegitimizing Trump will be a helpful narrative when Democrats inevitably find themselves the new “party of obstruction” the next four years, and are lending a helping hand.)

At least with previous flip-flops, Clinton didn’t try to insist she was she still holding her previous beliefs. But now she’s having her cake and eating it too. She gets the play the part of the genial statesman who has graciously accepted defeat. All the while, her allies are feverishly working in contravention of her public position.

Right now, the media is letting her get away with it. When Trump called the election rigged before he won and when he suggested millions voted illegally afterwards, he was justifiably torn to shreds. Now Clinton’s campaign is suggesting that she should essentially be installed as president despite losing the electoral vote. Where are the angry tweets? Where are the front-page headlines, the stern condemnations on cable news? I remember when questioning the election results was literally treason.

We all know what will happen next. Clinton will disappear for a year. She’ll then give give a softball interview to a big-name journalist (prediction: Andrea Mitchell). She’ll talk about her post-election life, how much she’s enjoying being a grandmother, maybe hints that she’d like to see Chelsea run for office. The fact that she was a shameless hypocrite a year earlier, the fact that she went further to undermine the electoral process than anything Trump ever did will go unremarked upon. And in the end, she’ll escape unscathed in the public eye.

It doesn’t have to be that way. We were told many times during the election that it wasn’t enough for Trump’s campaign to denounce X, Y, and Z in a statement, he had to come out and say it himself. Now, we should demand the same of Clinton. If it really is so essential that electors get a briefing and so essential that the recount go forward, Clinton should go in front of a camera and say so herself. Let the American people see her play the sore loser rather than letting her surrogates do it for her.