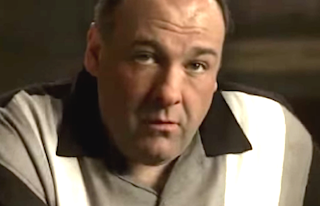 Film critic Martha P. Nochimson wrote a 5,000-word long profile of The Sopranos creator David Chase for Vox, but all anyone seems to care about (including Vox) are three words uttered by Chase in response to the question, Is Tony Soprano dead?

For anyone who watched the sharp cut-to-black ending of the HBO series in 2007, once they realized their cable had not gone out, the next logical conclusion was that the abrupt finish was meant to represent Tony’s experience of getting shot in the head and instantly dying. Death was a constant threat in the series, but from Tony’s perspective, when it came, it was without warning and without sentimentality.

But that’s now how Chase, who has been hounded by fans and critics with this question for seven years, sees it. Here’s the pertinent passage from the Vox piece:

I had been talking with Chase for a few years when I finally asked him whether Tony was dead. We were in a tiny coffee shop, when, in the middle of a low-key chat about a writing problem I was having, I popped the question. Chase startled me by turning toward me and saying with sudden, explosive anger, “Why are we talking about this?” I answered, “I’m just curious.” And then, for whatever reason, he told me…

Watch the infamous ending below, via HBO:

Update — Aug. 27, 7:50 p.m. ET: David Chase is apparently not thrilled with the narrative that he has “finally” answered the question of whether Tony Soprano is dead or not. Through a publicist, Chase issued the following statement in an attempt to clarify what appeared to be a fairly definitive statement in the Vox piece:

“A journalist for Vox misconstrued what David Chase said in their interview. To simply quote David as saying, ‘Tony Soprano is not dead,’ is inaccurate. There is a much larger context for that statement and as such, it is not true.

As David Chase has said numerous times on the record, ‘Whether Tony Soprano is alive or dead is not the point.’ To continue to search for this answer is fruitless. The final scene of THE SOPRANOS raises a spiritual question that has no right or wrong answer.”

So now we can all go back to our original confusion.