‘The Sun Has Not Exploded’: Paper Posts Weirdest Correction Ever

‘The Sun Has Not Exploded’: Paper Posts Weirdest Correction Ever

Online readers of Georgia newspaper Athens Banner-Herald website were a little taken aback by something that appeared in the news banner: 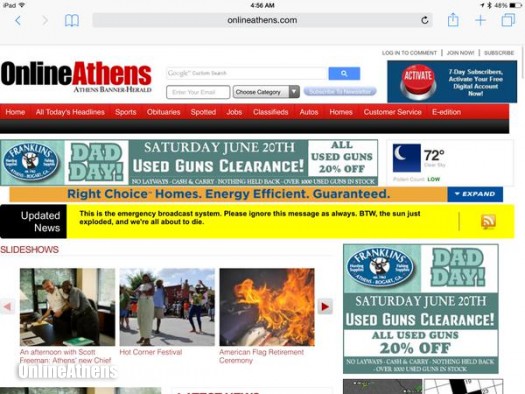 The last sentence there reads “BTW, the sun just exploded, and we’re all about to die.”

Well, that banner got a lot of attention, and today the Banner-Herald posted a correction of sorts literally titled “The sun has not exploded.”

People on Twitter really had some fun with this one:

I'm sorry, but not all statements have to be hedged.
“And to our knowledge, the sun has not exploded"
http://t.co/Zb4MaBR7Vl …

Because having the sun explode is a bad way to start the week. http://t.co/yxM66jTorz pic.twitter.com/wi3eYsGl8S

but how is the sky has it fallen http://t.co/8g1DZNQjNT

So relieved that the sun hasn't exploded and we're not all about to die: http://t.co/lMuCsKFKvu

They said the banner was an “unauthorized updated news item” and they’re looking into how it got up there. But rest assured, the sun is perfectly fine.

Now, there have been rumors of the earth actually exploding soon to make way for a hyperspace express route, but you shouldn’t pay attention to that tabloid stuff.