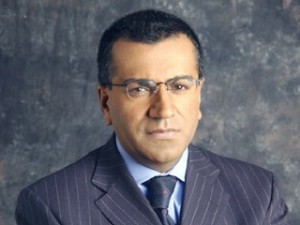 Martin Bashir officially left MSNBC today after backlash over his vulgar comments about Sarah Palin, but this is not the first time Bashir’s faced this kind of backlash. Fox News media critic Howard Kurtz dug up another example, this one from Bashir’s past at ABC News.

Kurtz cites a 2008 report from New York Magazine (though he doesn’t link to it), in which a Daily Intelligencer blog post takes particular note of his “tabloid shamelessness” and tells of an awkward, embarrassing moment when Bashir addressed the Asian American Journalists Association.

“I’m happy to be in the midst of so many Asian babes,” he said onstage, with his 20/20 colleague Juju Chang nearby. “In fact, I’m happy that the podium covers me from the waist down.” He then noted that a speech should be “like a dress on a beautiful woman — long enough to cover the important parts and short enough to keep your interest — like my colleague Juju’s…. Some audience members booed. ABC wasn’t pleased.

Bashir ended up getting “quietly suspended,” as Kurtz puts it, after that incident, and at the time he wrote a letter to the AJAA, apologizing and saying, “I… hope that the continuing work of the organization will not be harmed or undermined by my moment of stupidity.”

In his statement today upon leaving MSNBC, Bashir made a similar remark, saying, “It is my sincere hope that all of my colleagues, at this special network, will be allowed to focus on the issues that matter without the distraction of myself or my ill-judged comments.”