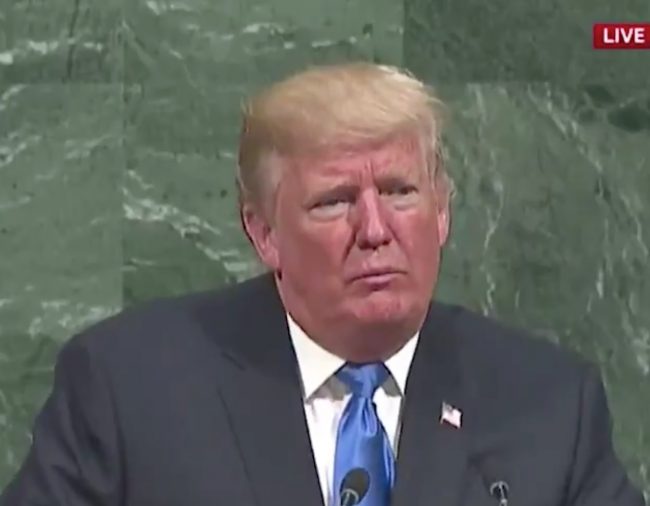 The nickname that President Donald Trump gave North Korean leader Kim Jong-Un on Twitter Sunday made it into his speech Tuesday before the United Nations General Assembly.

“Rocket man is on a suicide mission for himself and for his regime,” Trump said.

Blue check Twitter was taken aback by Trump’s use of the nickname during a formal address. Here’s a sampling of the reaction:

“Rocket man” made the TelePrompTer?!?!

This is real life. pic.twitter.com/7J0y4RzgfY

Was ‘Rocket Man’ really in his TelePrompter?! — “Rocket Man is on a suicide mission for himself– and for his regime.”

Yep, he said it: “Rocket man is on a suicide mission for himself and his regime.”

If I were a maniac leading an impoverished state with nuclear weapons, I would take it as a compliment to be called Rocket Man.

Trump usually has a real gift for the nicknames, but I would bet you Kim Jong Un likes being called “Rocket Man.”

They handed Trump a speech. He pompously crossed out Jong-un and wrote in Rocket Man and handed it back. “I fixed it.”

So. “Rocket Man” will be a key takeaway. Was he ad-libbing, or did the WH staff go along with?