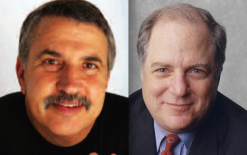 Today’s New York Times op-ed pages are all fired up…in fact they’re almost bloggy. I was going to confine this post to Tom Friedman‘s assessment of CNN’s decision to fire Octavia Nasr, but how to resist Frank Rich who manages to connect Mel Gibson‘s abusive tirades with the current state of politics (and Fox News) in this country.

First here is Friedman, who not only worries what CNN’s decision portends for future journalists, but backs up the thinking behind Nasr’s controversial (singular) tweet. It’s rare that I say this anymore about a Friedman piece, but this one is definitely worth reading all the way through.

I find Nasr’s firing troubling…To begin with, what has gotten into us? One misplaced verb now and within hours you can have a digital lynch mob chasing after you — and your bosses scrambling for cover. A journalist should lose his or her job for misreporting, for misquoting, for fabricating, for plagiarizing, for systemic bias — but not for a message like this one.

What signal are we sending young people? Trim your sails, be politically correct, don’t say anything that will get you flamed by one constituency or another. And if you ever want a job in government, national journalism or as president of Harvard, play it safe and don’t take any intellectual chances that might offend someone. In the age of Google, when everything you say is forever searchable, the future belongs to those who leave no footprints.

And here is Rich on Gibson…he is not nice.

Six years ago [Mel Gibson] was not merely an A-list movie star with a penchant for drinking and boorish behavior but also a powerful and canonized figure in the political and cultural pantheon of American conservatism. That he has reached rock bottom tells us nothing new about Gibson. He was the same talented, nasty, bigoted blowhard then that he is today. But his fall says a lot about the changes in our country over the past six years. We shouldn’t take those changes for granted. We should take stock — and celebrate. They are good news…It was into that tinderbox of America 2004 that Gibson tossed his self-financed and self-directed movie about the crucifixion, “The Passion of the Christ.”
[…]
It seems preposterous in retrospect that a film as bigoted and noxious as “The Passion” had so many reverent defenders in high places in 2004. Once Gibson, or at least the subconscious Gibson, baldly advertised his anti-Semitism with his obscene tirade during a 2006 D.U.I. incident in Malibu, his old defenders had no choice but to peel off. Today you never hear conservatives mention their embrace of “The Passion” back then — if they mention Gibson at all. (Fox News has barely covered the new tapes. Ed note: Shepard Smith has talked about this frequently.) But it isn’t just Gibson who has been discredited. Even as he self-immolated, so did many of the moral paragons who had rallied around him as a culture-war martyr.