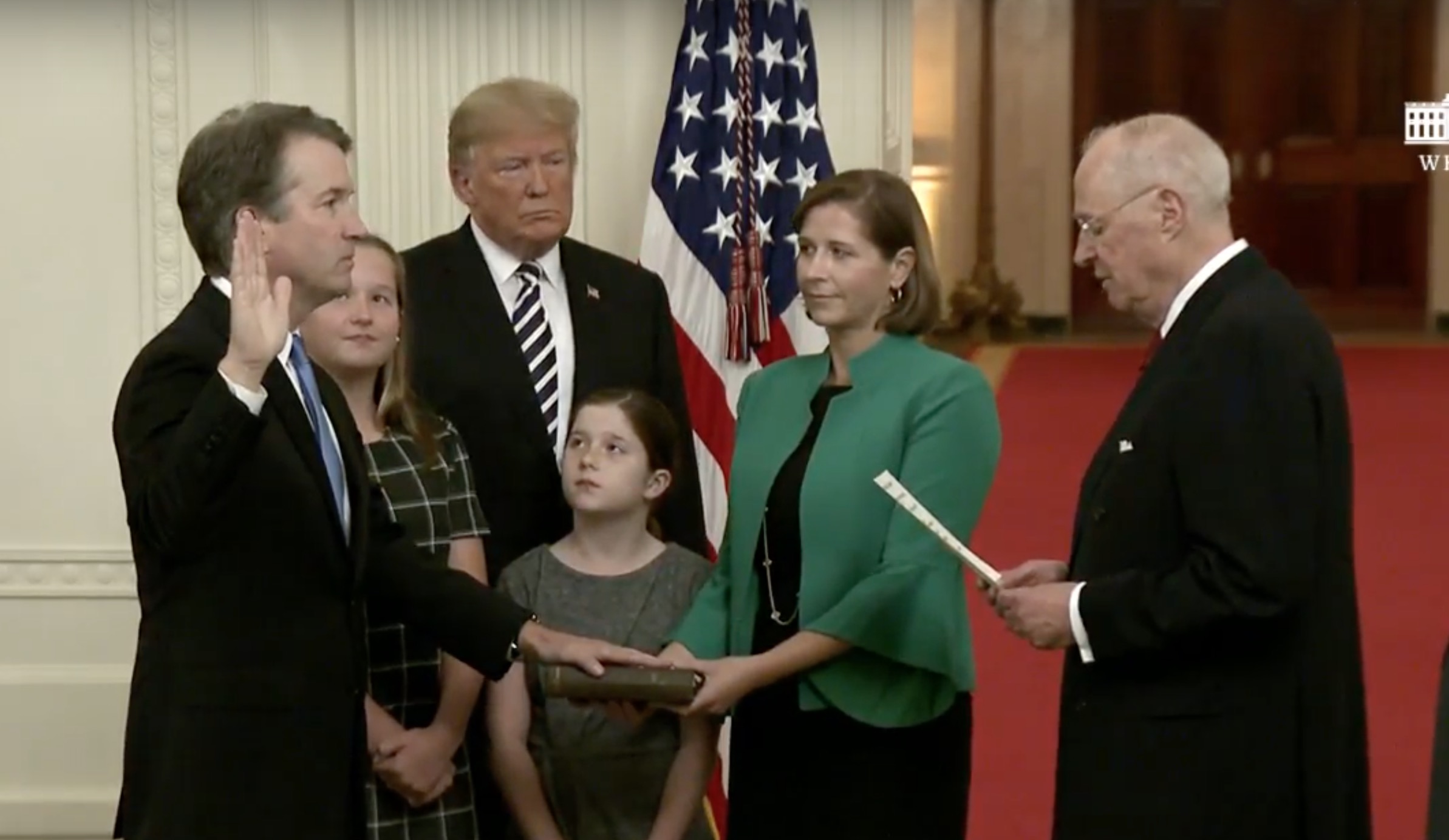 Trump, near the outset of his remarks, apologized to Kavanaugh on behalf of the nation, lamenting that the Justice’s family experienced “terrible pain and suffering” because his Supreme Court nomination was marked by weeks of bitter and bruising partisan fights. These political battles were largely based on sexual misconduct allegations against Kavanaugh, but tonight, Trump more or less pronounced the new justice innocent in the midst of his congratulations.

Since Kavanaugh’s judicial ascension was such a flashpoint for the last few weeks, political junkies didn’t hesitate to offer their first reactions online. You can see that Trump and Kavanaugh critics took notice of the ceremony — with many not approving of how things went.

At the White House swearing-in, Trump obscenely made the occasion a purely partisan one with his ludicrous claim that Justice Kavanaugh had been “proven innocent” and his misogynistic apology for the Senate’s even having listened to Dr. Blasey Ford.

My official reaction to what’s happening in the East Room right now…. pic.twitter.com/g0jAD5OZsW

Trump's one redeeming quality is he doesn't know when to quit & takes victory laps so far that now Brett Kavanaugh will never be respected even inside the Supreme Court.

Trump supporters, on the other hand, were quite delighted:

#AmericaFirst – @realDonaldTrump: Kavanaugh is a man of decency, character, kindness, and courage. Now, from the bench of the nation’s highest court, he will defend the eternal rights and freedoms of all Americans. #MAGA #TrumpTrain #Dobbs pic.twitter.com/a1qBEnr9FV

Kavanaugh should have ended with "AND YOU CAN KISS ROE GOODBYE!"

Thank you @realDonaldTrump for putting #BrettKavanuagh on the Supreme Court. History today was made!

However, MSNBC host Chris Hayes especially drew attention tonight with his passionate reaction to the ceremony. Here’s a sampler:

Apologizing "on behalf of the American people"

Then says he was "proven innocent" https://t.co/vsJYWATobA

This is waay waay worse than I imagined and I thought it would be bad.

I now realize this speech is happening to erase the memory of his Thursday performance so it's not the last thing in people's minds before he takes the seat on the court.

Just crystallized for me how much this entire thing was a dry run for when Mueller submits his findings.