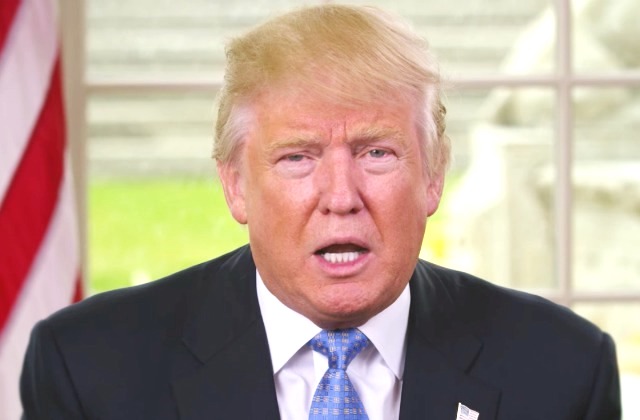 On Monday morning, President Trump defended this weekend’s “extreme vetting” executive order while dismissing the outrage and the immigration connotations sparked in the fallout.

The order banned U.S. entry to individuals from seven predominantly-Muslim nations, and it prompted anti-Trump, pro-Muslim refugee protests around the country. Many of these demonstrations took place at airports, and there were concerns about whether Green Card holders would be cleared for entrance, or otherwise be detained like multiple travelers were.

Trump responded to the commotion by downplaying the complications his order caused and saying it was worth the price for national security. He also had some ideas about who was to blame for problems at the airport over the weekend:

Only 109 people out of 325,000 were detained and held for questioning. Big problems at airports were caused by Delta computer outage,…..

protesters and the tears of Senator Schumer. Secretary Kelly said that all is going well with very few problems. MAKE AMERICA SAFE AGAIN!

There is nothing nice about searching for terrorists before they can enter our country. This was a big part of my campaign. Study the world!

If the ban were announced with a one week notice, the “bad” would rush into our country during that week. A lot of bad “dudes” out there!

Trump’s dig at Chuck Schumer refers to a Sunday press conference where the New York senator teared up while denouncing the president’s “mean-spirited and un-American” executive order. Trump also attributed airport troubles to the severe computer outage that caused Delta Airlines to ground all of their domestic flights.

UPDATE – 9:59 a.m. EST: During a meeting with small business owners, Trump took aim at Schumer again by saying his tears were fake and Trump wants to know “who is his acting coach?”