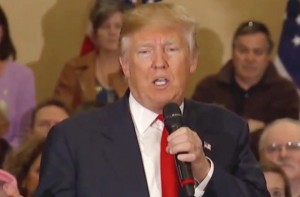 At a rally in South Carolina this afternoon, Donald Trump called for a boycott of Apple because of how they’re refusing to unlock the San Bernardino killer’s phone for the FBI.

As Trump was going on a tangent about China today, he again said Apple’s in the wrong, even saying, “What I think you oughta do is boycott Apple until such time as they give up that security number. Boycott Apple.”

He suggested Cook’s “looking to do a big number, probably to show how big a liberal he is.”

I use both iPhone & Samsung. If Apple doesn't give info to authorities on the terrorists I'll only be using Samsung until they give info.

Hopefully others will follow suit. Our country needs & should demand security. It is time to get tough & be smart!

Watch his comments above.