Trump Complains: CNN Used the 'Worst Cover Photo' of Me in Unprecedented Book

Trump Complains: CNN Used the ‘Worst Cover Photo of Me’ on 2016 Election Book

President-elect Donald Trump has decided once again to tweet about his disdain for CNN. Today’s tweets are somewhat unusual however, because instead of criticizing the network’s reporting as per usual, Trump decided to complain about the photo used on the network’s new book about the election

@CNN just released a book called "Unprecedented" which explores the 2016 race & victory. Hope it does well but used worst cover photo of me!

CNN released Unprecedented: The Election That Changed Everything last month, and it chronicles the twists, turns, and unconventional politics that marked Trump’s rise to the presidency.

Here’s a picture of the book in question: 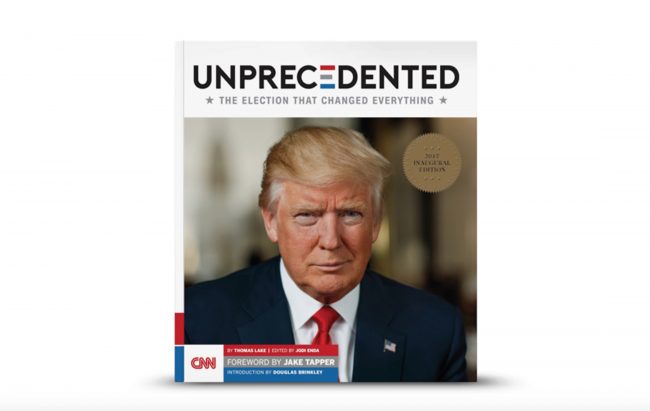 Trump wasn’t done yet though. He also took time to gloat about how his victory came as a surprise to many, and that Hillary Clinton must’ve known she would lose when she cancelled a fireworks display she had planned at her Election Day event.

Various media outlets and pundits say that I thought I was going to lose the election. Wrong, it all came together in the last week and…..

I thought and felt I would win big, easily over the fabled 270 (306). When they cancelled fireworks, they knew, and so did I.

CNN’s Brian Stelter had a reaction to all of this:

12:55pm: I was on @CNN talking about the "Unprecedented" book and Trump's doubts he would win. Then he tweets about both. Coincidences? pic.twitter.com/hvhokeTuuZ

During a meeting with media figures in November, Trump reportedly blasted representatives from NBC and complained about how they would constantly use unflattering photographs of his face. Trump reportedly turned his rage against other media members that were present as well, and descriptions of the meeting characterized it as a “f*cking firing squad.”