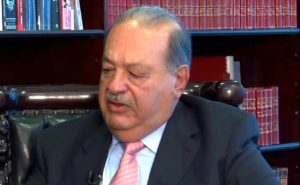 It appears that President-elect Donald Trump is attempting to smooth over rocky relationships with Mexican business leaders following a year-plus of harsh campaign rhetoric towards Mexico regarding the need for a border wall and updated trade policies.

Trump confirmed to the Washington Post that he met with billionaire Carlos Slim on Saturday at Mar-a-Lago for a private dinner. Trump described the meeting as “a lovely dinner with a wonderful man.”

Of course, Trump didn’t have such kind words for Slim during the campaign. After numerous women came forward to accuse Trump of sexual assault and misconduct in the wake of his “grab ’em by the pussy” comments going public, Trump accused Slim of running a conspiracy against him.

Following Trump’s surprising victory, Slim has seemingly extended an olive branch to Trump, despite being critical of the president-elect’s tone towards Mexico and NAFTA during the campaign.

As highlighted by the Post, Slim recently told a forum that if Trump can keep his promises of growing the U.S. economy, “that would be fantastic for Mexico.”

Slim, the majority owner of Grupo Carso, is one of the world’s richest men, with a net worth near $50 billion.

Yes, it is true – Carlos Slim, the great businessman from Mexico, called me about getting together for a meeting. We met, HE IS A GREAT GUY!