Trump Only Today Started Claiming That Michelle Fields ‘Grabbed’ Him 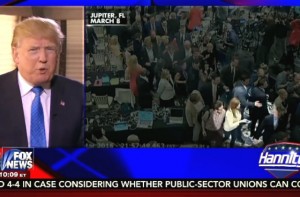 Donald Trump and his people are claiming that it’s Michelle Fields who changed her story after video emerged of Corey Lewandowski grabbing her.

Yeah, no. It’s actually Trump himself who changed his story, because today, suddenly, after the surveillance video from his hotel came out, he “remembered” that Fields grabbed him.

The first time he brought it up today was with this tweet, which does not depict Fields grabbing him:

Victory press conference was over.
Why is she allowed to grab me and shout questions? Can I press charges? pic.twitter.com/qbW2RjkINX

But then he pulled the old CSI trick. Computer, ENHANCE!

Why is this reporter touching me as I leave news conference? What is in her hand?? pic.twitter.com/HQB8dl0fhn

He said it again on his plane today––”I think if you look at it, he was trying to block her, that’s the way I would view it, and she’s grabbing me and asking questions.”

Trump said the same during his rambling appearance for CNN’s town hall, and during his Hannity interview tonight, he seemed dead certain this totally happened:

If Trump was really grabbed by Fields and felt that undermined her case, um, wouldn’t he have brought that up weeks ago?