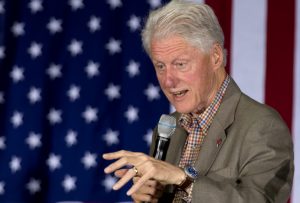 Democrats (and some Republicans) are literally gagging over Donald Trump’s crude sex talk from years gone by and pretending a man from Hope, Arkansas never asked a White House intern for blow jobs in the Oval office. Bill Clinton rose to the highest office in the land after having fornicated with numerous paramours in the land. And Bill performed all these sex acts—including allegedly sticking a cigar inside intern Monica Lewinsky’s vagina—while he was married to Hillary Clinton. That my fellow Americans is a mountain full of disgusting, repugnant behavior that Trump’s verbal sex talk couldn’t begin to top.

While the high and mighty condemnations are being hurled at Trump from Republicans in Congress at a break-neck speed, I was happy to see the Washington Post release a guide to Bill’s sexual exploits. Let’s recall in 1992, the allegations of affairs nearly killed Clinton’s presidential campaign.

The Washington Post’s guide is meant to help viewers fill in the blanks of what will likely be tonight’s R-rated second presidential debate. What’s worth noting is that the Post breaks down Bill’s philandering into three unsavory categories under which it lists the women affected by former president Bill Clinton.

If that isn’t a mouthful of sin and bad behavior, I don’t know what is! The Liberal mainstream media is right that Bill isn’t running for president but let’s not hold Trump to a different standard than Clinton. In 1992, voters moved past Bill’s exploits, focused on the issues and elected him president.

The endless stream of condemnations erupting from elected Republicans demanding Trump resign is laughable in that I doubt any of those men and women holding office are sinless.  I don’t like the language Trump used in his locker room conversation with Billy Bush or his radio interviews objectifying his daughter Invanka and other women with Howard Stern.

I’m also a woman who’s not naive to believe that more than a few men and yes, even women talk this way in private.  Read the runaway best seller 50 Shades of Gray, whose tawdry sex tale, laced with dirty talk, sold 80 million copies almost exclusively to women!

Trump isn’t blameless. Since last year, the GOP nominee hasn’t been able to shake incidents of crude behavior towards women like his childish feud with Fox News’ Megyn Kelly or calling women “Miss Piggy” or “fat.”  The revelation of the 2005 Access Hollywood video with then host Billy Bush wouldn’t have been as much of a problem had these other incidents never occurred. The video was the exclamation point on Trump’s boorishness and may very well have killed his candidacy.

Trump should have known better and prepared for this assault and more from Hillary. For three decades, Hillary and Bill been ruthlessly working for this moment.

As Trump readies himself for the second debate, the unconventional candidate would be wise to try to salvage whatever dignity he has left and act like a conventional, disciplined presidential nominee. And those Republicans, pretending they’re SO offended by Trump’s remarks, are really angry he made it this far. But the elites can blame themselves because they only reason Trump was able to mount the party in the first place was because the GOP has become so exclusive and un-arousing.