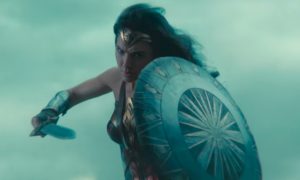 Wonder Woman, directed by a woman and featuring a female lead to save the world, is regarded by many as the film of the summer. The film shattered a number myths about what women can’t do in the male-dominated Hollywood landscape, for example, that female-led movies can’t top the box office, and that films with female leads can’t kill it with audiences.

But others, despite their voices and complaints being muted by mainstream liberal and feminist publications, were critical of its casting. For certain, there was no shortage of irony in casting Gal Gadot, a vocal Zionist and former soldier and combat trainer in the Israel Defense Forces, in a film that explores the dangers of militant nationalism run unchecked.

In either case, if liberals were able to overlook this, maybe they’ll pay attention to a Hollywood Reporter report that the notorious Koch brothers, Republican donors known to pour millions into campaigns to roll back environmental regulations as well as anti-LGBT and anti-choice groups, are secret investors in Wonder Woman.

Sources say Charles G. Koch and David H. Koch — who are worth a combined $96.2 billion and wield enormous power in political circles as major backers of right-wing politicians — took a significant stake valued at tens of millions of dollars in RatPac-Dune Entertainment. Now-Treasury Secretary Steven Mnuchin brought the brothers in as investors as part of a $450 million deal struck in 2013 — a move that was never disclosed because RatPac-Dune is a private company.

Though Mnuchin is no longer involved with the slate financing facility, having recently put his stake into a blind trust in order to avoid a conflict of interest, the Koch brothers continue to be stakeholders in such films as Wonder Woman, Dunkirk and Steven Spielberg’s upcoming Ready Player One.

One thing is for certain, though — liberals should be dubious of a film that, via its casting choices, implicitly affirms the displacement and marginalization of Palestinians. Feminism is about the empowerment of all women, not the victory of one white woman.

“It just doesn’t make any sense for someone to say, ‘Is there room for people who support the state of Israel and do not criticize it in the movement?’” Palestinian activist Linda Sarsour told The Nation in June. “There can’t be in feminism. You either stand up for the rights of all women, including Palestinians, or none. There’s just no way around it.”