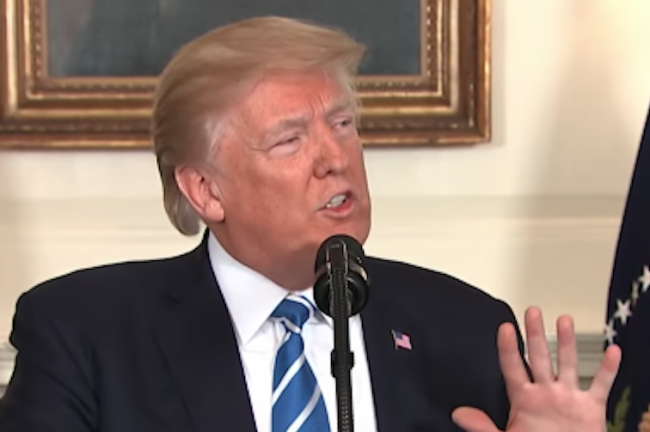 “Why are we having all these people from shithole countries come here?” President Donald Trump reportedly said during a bipartisan meeting with lawmakers Thursday, according to the Washington Post.

The condemnation came fast and furious across social media. Here’s a sampling of the reaction from politicians, pundits, and others:

Just when you think he cannot say anything more vulgar and offensive, he embarrasses us again. He is a vile stain on our country's reputation. https://t.co/g5YMDlTvQB via @nbcnews

Just when you thought Donald Trump could not get any more racist, he digs down to an even deeper low. These vile comments are unacceptable and unbecoming of the Presidency. It is time for my Republican colleagues to say so. Enough is enough. Silence is complicity. pic.twitter.com/3lgH1uWhaq

“Why are we having all these people from sh*thole countries come here?” Trump said referring to African countries and Haiti. Ready to organize yet? https://t.co/ALkmkLnsKz

I condemn this unforgivable statement and this demeaning of the office of the Presidency. I will always fight for the vulnerable among us and against bigotry in all its forms. https://t.co/uffsZkgnfy

All human beings have value Mr President. It's just that not all could receive $millions to set them up in life. Your derogatory term for certain countries perhaps underscores how a different situation might lead others to seek the better life you were privileged with at birth.

Oprah would not, in an Oval Office meeting with senators, use the term "shithole counties." Oprah also would not to go to Davos.#JustSaying

He’s not even trying to hide the racism anymore. https://t.co/4zxG3NA0Cw

you're a joke. resign. https://t.co/QmkuRArIeh

You can keep telling me that this man and support of him isn't rooted in racial hostility. I'll just keep reading what he says and watching you still support him. https://t.co/B0g0TuCPB1

I was on a flight without wifi for 3 hrs. Land and immediately read Trump reportedly opened his pie-hole to insult immigrants…again.
I can’t with this freaking troglodyte. Just can’t.
https://t.co/yx8v4ErgH3

Trump is the Republican standard-bearer. @SpeakerRyan: what are you going to do?https://t.co/qx1b7mRKyB

So President doesn't want immigrants from "shithole" countries in Africa and Haiti. Thinks we should bring more people from Norway. I'm trying to think if that's racist.