Twitter Erupts Over ‘White Supremacist’ America First Caucus: ‘What Does That Even Look Like ? Can You Use Spices?’ 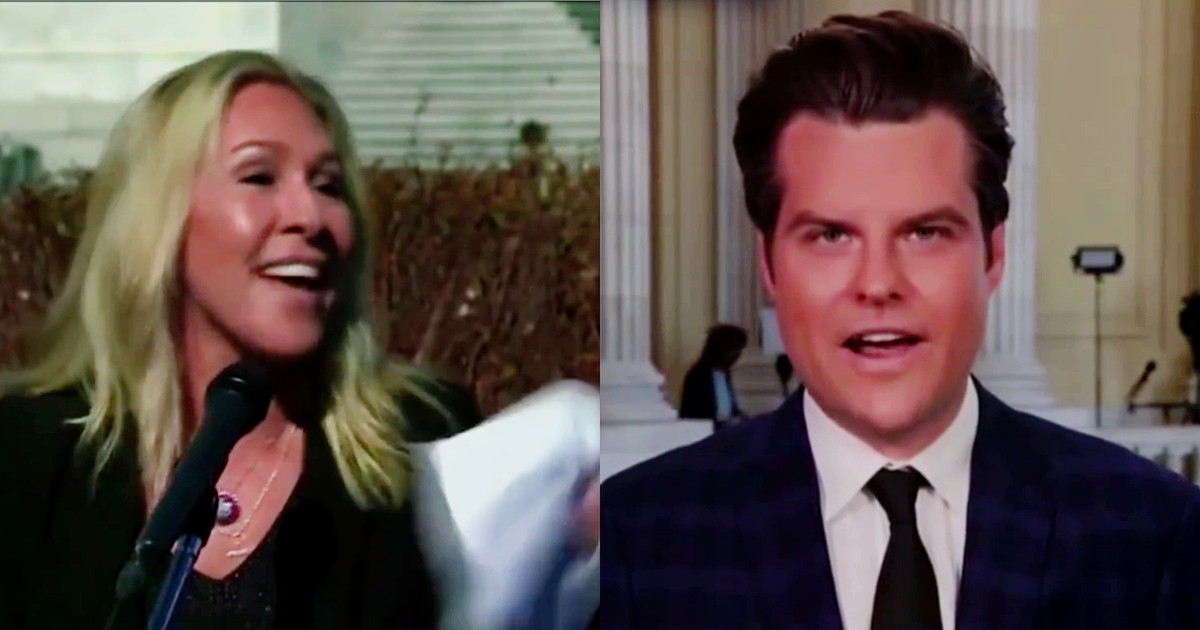 The announcement of the caucus drew strong condemnation from some Republicans, a stern subtweet from House Minority Leader Kevin McCarthy, and a blizzard of condemnation and mockery from blue-check Twitter.

Members of Congress from both parties were among those who pilloried the caucus with varying degrees of intensity.

So what kind of food will they eat in this Caucus meeting? Just purely Anglo Saxon food? What does that even look like ? Can you use spices? What about tomatoes and potatoes those were cultivated by Indigenous people of the New World? https://t.co/pQpvyFPoaI

I guess they may have skipped 19th century American history and the part about the Civil War? Read Lincoln’s 1858 July 4th speech or Frederick Douglass 1869 Composite Nation to understand American identity. I’d be happy to join any America caucus centered around those texts.

This document is nakedly racist and disgusting. This supposed caucus and its members represent a dangerous nativist perspective that hurts our country, but sadly is not surprising. https://t.co/G1cVLe3rSN

As a Congressman of Anglo-Saxon heritage, let me be the first to decline to join this White Nationalism Caucus. https://t.co/yXpcL1Rusv

A more accurate name for new organization of House Republicans led by Marjorie Taylor Greene would be the White Supremacist Caucus https://t.co/VlXdm0FdFt

I’m not joining the GQP’s White Supremacy Caucus. But I need your help to defeat it. Make a $10 contribution and you have my word I’ll do all I can to root this out of Congress. Join me here: https://t.co/z8bGYK7SmP https://t.co/NdYks9ZYRV

Dear @mtgreenee and @RepGosar: When you say Anglo-Saxon, do you mean Aryan? Or master race?

Can I join? Will your caucus meetings serve tacos?

I served on active duty in the US military to defend your right to form Aryan type organizations. I just wish you wouldn’t do so. https://t.co/JHrSoRIhzl

Members of the House republican caucus are forming a white supremacist caucus dedicated to “Anglo-Saxon political traditions.” Take a good look: this is the republican party. https://t.co/elMHj875Xx

It’s not a coincidence. It’s the plan. https://t.co/8hHegy3oqg

I believe anyone that joins this caucus should have their committees stripped, and the Republican conference should expel them from conference participation. While we can’t prevent someone from calling themselves Republican, we can loudly say they don’t belong to us. https://t.co/ULEF5MRyWf

I didn’t think there would be a need for clarification, but I am condemning this newly formed caucus, not the Punchbowl News tweet.

Declaration of Independence: “We hold these truths to be self-evident, that all men are created equal-“

The Anglo-Saxon caucus created by @mtgreenee and @RepGosar has apparently admitted Matt Gaetz.

I wonder if their caucus has secret signals and means of communications, like secret Aryan Venmo handles? https://t.co/lXdYzKchOI

There were few who chimed in in support.

I’m proud to join @mtgreenee in the #AmericaFirst Caucus.

We will end wars, stop illegal immigration & promote trade that is fair to American workers.

This is just a hit piece from the America Last crowd in Big Media, Big Tech & Big Government.https://t.co/hjGiuSLwBW

And then there was this guy.

I fully support President Trump’s America First agenda & policies that prioritize hardworking Americans. But I will not agree to join any caucus until I’ve had an opportunity to research their platform—which I haven’t done with the America First Caucus & therefore haven’t joined. https://t.co/X7F3QmEifV

Journalists, media figures, and other verified users joined in as well.

They are free to relocate to Mother England at any time.

Well, after they prove they’ve been vaccinated. https://t.co/mdcXxlG1xt

I just read their manifesto and my only question is … did David Duke write it? Because whoa… https://t.co/EKxQ50JQSC

Once you get past the horror of a white supremacist club in Congress, give yourself permission to laugh at a caucus that calls itself “America First” while clamoring for “Anglo-Saxon” politics and “European architecture” https://t.co/zcHZ9zC11X

They are more-or-less explicitly saying that this is their country and the rest of us should just be thankful they permit us to live here. https://t.co/rPHvUFRqrq

this is called the White Supremacy Caucus https://t.co/59e7QYJhJJ

Next up the GOP will hold Whites Only meetings. (Kidding, they are already doing that) https://t.co/wWrCTSJspX

These people are exactly who you think they are, and they’re relentless proud of it. https://t.co/8SKiIN51VM

Reminder: In FEB Rep. Gosar was the keynote speaker at far-right activist Nick Fuentes’ “AFPAC” conference, where Fuentes and others pushed white nationalist ideas including railing over the US losing its “white demographic core.” https://t.co/PIZHhh9Bgm