Twitter Eviscerates Trump For Weighing in on Franken: ‘You Should Probably Just Shut the Hell Up’ 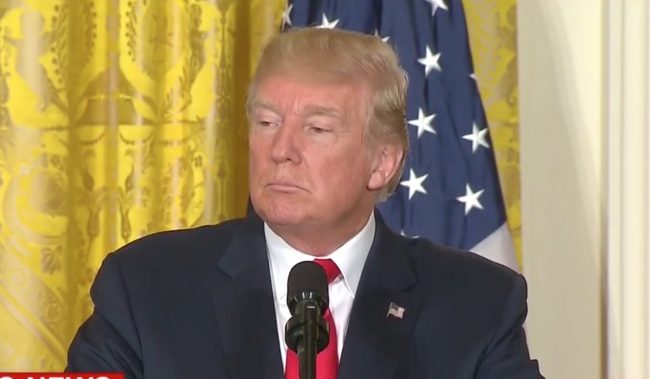 After a prolonged silence on accusations of teen sex abuse against Alabama Senate candidate Roy Moore, POTUS was unable to resist weighing in on misconduct allegations against Sen. Al Franken (D-MN).

Of course, Twitter seized on the fact that Trump himself has faced a number of on-the-record sexual misconduct allegations. Here is a sampling of the reaction on social media:

It's been a week since the 1st allegations surfaced against Roy Moore. Silence from Trump.

It's been about 12 hours since the Franken allegations. Trump has tweeted twice. https://t.co/uqFcQ1kMUh

Trump comments on the Al Franken allegations the same day they are published. It’s been over a week since the Roy Moore news broke, but nothing on that front. https://t.co/V1VAXXbkli

We need ethics investigations into alleged sexual misconduct of all elected officials. 20+ women have come forward about the president. https://t.co/zkkQ8Pe9Bz

you have to really not trust autocorrect to get “Frankenstien” out

Trump is so mad about Al Franken that while he was tweeting about him, he walked into a Miss Teen USA dressing room by accident.

Trump has more than a dozen, on-the-record, allegations of sexual assault against him, and was caught on tape bragging about committing sexual assault. This is a dangerous game for him to play. https://t.co/seUnYcBuhU

i’m glad Trump couldn’t resist on Franken. that puts him front and center.

bring back the 22 women who have accused him of assault. they deserve the spotlight.

The official White House position on all 16 women who accused Donald Trump of sexual assault is that they are all liars.

Seeing a serial sexual abuser like Trump tweeting this bullshit makes me sick to my stomach. I can only imagine what it must feel like for women who’ve been through experiences like Trump inflicted on so many.

Donald Trump is now attacking a politician for making crude remarks about a woman (and saying they were on a tape too) https://t.co/pYdmWbGZHg

One of the things Trump does is act as if nothing he has said or done in the past is at all relevant to his words and actions in the present. It’s beyond hypocrisy, it’s like malicious amnesia.

You should probably just shut the hell up about this topic – you know, being an accused rapist and confessed sexual predator and all. https://t.co/P03aOlUxRM

When God was giving out shame, Trump was clearly busy, probably out somewhere grabbing pussy… https://t.co/jM3t1ZEKxr

Donald Trump can be this brazen & hypocritical because he knows that his Republican colleagues won’t meaningfully hold him accountable.

Trump on Franken: Pot discusses sins of the kettle.

Who's up for a weeklong media recap of all the sexual harassment/assault allegations against Trump? Because that's what Trump just opened up.