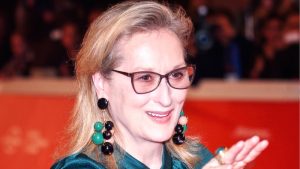 Today, Meryl Streep was nominated for her 20th Academy Award for Florence Foster Jenkins, breaking her own record for most nominations of all time. Just a few weeks ago, Streep won a lifetime achievement award at the Golden Globes and used her time onstage to deliver a blistering anti-Donald Trump speech, prompting our thin-skinned Commander in Chief to call her “overrated” on Twitter.

Streep responded to her own nomination with a gif. Others are responding to her nomination by taking to Twitter to talk about just how “overrated” the 20-time nominee and three-time winner actually is.

.@realDonaldTrump Can you believe the Academy overrated Meryl Streep for the 20th time?? Sad!

“One of the most overrated actresses in Hollywood” Meryl Streep, has received her 20th Oscar Nomination, breaking her own record. pic.twitter.com/DD6td0xXxo

Congratulations to Meryl Streep on earning her 20th Oscar nomination despite being overrated according to a raving moron.

If Trump was tweeting: Meryl Streep received her 20th Oscar nomination today. She didn’t win 16 times in the past. #Loser

the academy: I don’t think so#oscars