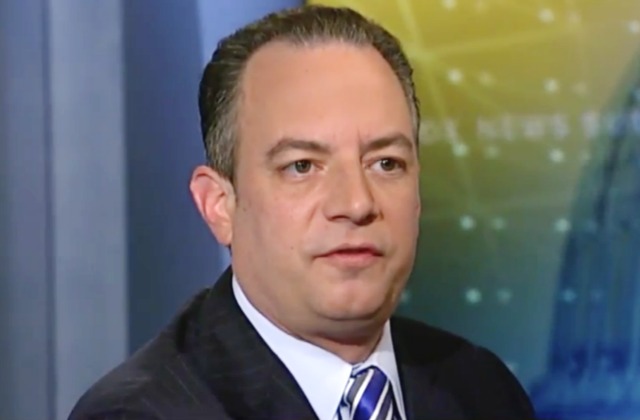 Politico broke a story this evening that indicated new White House Communications Director Anthony Scaramucci still stands to earn millions from his ownership stake in an investment firm. The report centered on financial disclosures he gave to the Office of Government Ethics.

After the article went up, Scaramucci sent out a tweet stating that he would go to the feds to complain about the leak. He also curiously tagged White House Chief of Staff in the tweet. 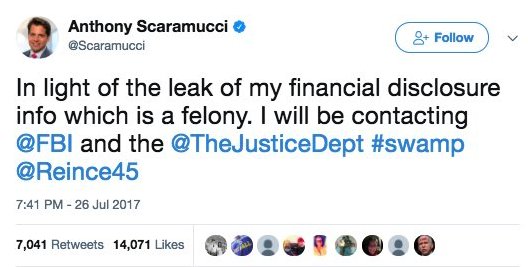 Well, a lot of folks on Twitter put two and two together and figured Scaramucci was accusing Priebus of being the leaker:

The new White House Communications Director is accusing the Chief of Staff of leaking his info https://t.co/vSK2Q41wxT

I think we know why Reince Priebus didn't want Anthony Scaramucci in the WH.

Could you disclose why you tagged @Reince45 in this tweet? https://t.co/C605EdozbP

I think the WH "communications director" just tweeted that he wants the WH "chief of staff" arrested by the FBI. https://t.co/vtkmKFwP35

We got some pop culture references as well:

Turns out this is actually the final scene of Reservoir Dogs https://t.co/wfvwfF5qcv

And Chris Hayes brought up how some others may have sympathy with Scaramucci:

It genuinely does suck to have your private information leaked, as dozens of DNC and Clinton campaign staffers can tell you.

Some pointed out that there really is no crime here for Scaramucci to report:

my first order of business: tweet fake crimes at the fbi

UPDATE 11:40 PM ET: And The New Yorker’s Ryan Lizza reported that Scaramucci is indeed accusing Priebus of leaking the disclosures and wants the FBI to investigate:

In case there's any ambiguity in his tweet I can confirm that Scaramucci wants the FBI to investigate Reince for leaking.

Wrong! Tweet was public notice to leakers that all Sr Adm officials are helping to end illegal leaks. @Reince45 pic.twitter.com/AB0reseuX1