Univ. of Utah Students Have Degrees Withheld Over “Penis Gag” in School Paper 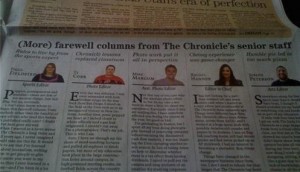 Hey, you know what phrase you rarely see when you’re flipping through your Google Reader? “Penis Gag,” that’s what. It just never seems to show up in headlines. Fortunately, the St. Louis City Weekly has blessed us today with the story of nine graduating seniors who hid the words “penis” and “cunt” in this year’s final issue of The Chronicle, the University of Utah’s school paper. If there’s a better story for a Friday morning, then we don’t know it.

The annual gag, where dirty words are arranged using the drop-cap letters in the “Farewell Seniors” article, has been going on for years. However, this time, pictures of the prank were uploaded to the internet and began getting attention outside of the school’s journalism department, forcing the administration to take action.

“The Chronicle’s outgoing editor in chief, Rachel Hanson–who has also served as a City Weekly staff copy editor since February–says the nine students whose columns’ first letters spelled out the gag words each received an e-mail that says they allegedly violated the University of Utah’s Code of Student Rights and Responsibilities. They’re suspected of ‘intentional disruption or obstruction of teaching, research, administration, disciplinary proceedings or university activities,’ and ‘unauthorized or improper use of any university property, equipment, facilities or resources.'”

What’s wrong with that school? The students were clearly only doing their part to save print journalism. If there’s anything that sells papers, it’s hiding smutty words throughout your issues. Hell, do you think Newsweek would be getting sold right now if they had thrown in hidden penises every few weeks?

It’s interesting to remember that these hidden dirty words have been an annual tradition have been going on for more than a decade. It’s only now that the image caught fire on sites like The Fail Blog, that students are getting in trouble. You’ve got to imagine that the administration knew about this before now and are only making disciplinary actions this year so as to save face in the media. But, really, if they’re going to punish college students every time they make a dirty joke, they’re never going to get anything done.