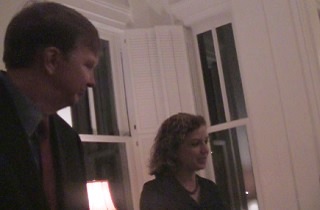 On Wednesday night, Senator Mary Landrieu (D-LA) hosted a launch party for DNC Chair Rep. Debbie Wasserman Schultz‘s new book, For the Next Generation: A Wake-Up Call to Solving Our Nation’s Problems. As the event wound down, Rep. Wasserman Schultz took a moment to discuss the recent raft of polls that show Democrats with encouraging leads in the generic congressional ballot, and to comment on Rep. Alan Grayson‘s (D-FL) provocative fundraising email.

The post-shutdown polling has many liberals in a celebratory mood, but Wasserman Schultz pointed out that “We’re a year away from the elections, so it’s hard to put a lot of stock in polls, but there’s no question that Republicans did some serious damage to their perception from voters, and to what the American people think of them. They clearly showed that they don’t really care about tanking the economy in the name of stopping people from having access to quality affordable health care. I think the American people will have a problem with that.”

Asked if she’s jazzed by the new poll numbers, Wasserman Schultz replied “No, I really just want us to be able to work together, and that’s why I wrote this book.”

On the subject of Rep. Alan Grayson’s fundraising email, which featured a burning cross that formed the “T” in the phrase “Tea Party,” Rep. Wasserman Schult reiterated the written statement she gave on the subject. “Well, I said to day that the imagery he chose was disappointing.”

Also in attendance was Organizing For Action’s Jim Messina, who was similarly cautious about the new polls, and said that he hadn’t seen Grayson’s controversial email: