Virginia GOP Official: When Obama ‘Goes To Hell,’ He’ll Say, ‘This Is All Bush’s Fault’

Virginia GOP Official: When Obama ‘Goes To Hell,’ He’ll Say, ‘This Is All Bush’s Fault’ 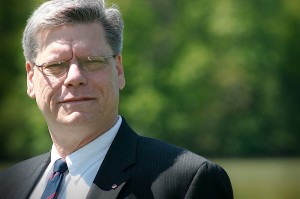 An official in the Virginia Republican Party, Bob FitzSimmonds, is garnering some attention for remarks he posted on Facebook. When President Barack Obama “goes to Hell,” he wrote, he’ll still be placing the blame on his predecessor, President George W. Bush.

FitzSimmonds’ post, published on Wednesday, read: “When Obama is 90 years old and he dies and goes to Hell, he is going to say ‘This is all Bush’s fault.'”

He currently serves as chief deputy clerk for Prince William Circuit Court and treasurer of the Virginia Republican Party’s State Central Committee — and is also a close ally of the state’s attorney general, and gubernatorial candidate, Ken Cuccinelli.

On Thursday, FitzSimmonds gave a comment to the Hampton Roads Pilot. In an email, he said, “My Facebook post was not about Obama going to Hell. It was about his obsession with blame shifting and I don’t really see anything inappropriate about it.”

Meanwhile, Cuccinelli distanced himself from the remark, via spokesman Noah Wall, who said, “Mr. FitzSimmonds does not speak for our campaign, and we don’t agree with his assessment.”

“Taking to Facebook to muse on the death of the President of the United States and whether or not he will go to hell is well below the standard of conduct Virginians set for their public officials and political leaders.

“Mr. Fitzsimmonds should apologize and his close allies like Attorney General Ken Cuccinelli and Republican Party of Virginia Chairman Pat Mullins should condemn his inflammatory remarks immediately,” he added. “As leaders in Washington put the elections behind them and try to solve the enormous challenges we face as a country, this type of rhetoric raises serious questions about whether certain factions of the Republican party are capable of putting Virginia families ahead of ugly partisan rancor.”