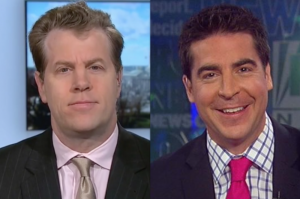 Columnist Eric Wemple has taken to the pages of The Washington Post to weigh in on a still-slightly-smouldering controversy from Saturday night, when Fox News’ Jesse Watters reportedly brawled with Ryan Grim of HuffPo after the White House Correspondents’ Dinner.

The Cliff’s Notes version of the drama is as such: Watters, who has spent his career largely ambushing people in man-on-the-street style interview hits was confronted by Grim in order to provide an apology to one of Grim’s coworkers at HuffPo: Amanda Terkel. Terkel was ambushed by Watters seven years ago after she wrote a critical piece about Watters’ longtime boss, Fox News’ Bill O’Reilly. A confrontation ensued Saturday between Grim and Watters, with many identifying the incident as a delicious comeuppance of sorts for Watters.

Wemple wrote on Tuesday that “ambush artist” Watters is just a part of the overall “lamentable cable-news legacy” of O’Reilly. “When Bill O’Reilly gets caught in a moment of hypocrisy or idiocy, he knows what to do. Blame those loons on the left, that is,” writes Wemple, referencing that when O’Reilly addressed the scuffle directly on-air Monday night, he simply noted that it was the fault of the leftwing media (ie. Grim) as usual.

Wemple notes in his op-ed:

If what Grim did was harmful, then O’Reilly and Watters should be doing time for serial harming. Because under O’Reilly’s direction, Watters has turned the ambush interview — precisely what Grim was doing, only with more hostility — into an “O’Reilly Factor” staple. He ambushed Terkel. He ambushed Bernie Sanders. He ambushed Eugene Fidell, who’s representing Bowe Bergdahl. He ambushed many, many others, too. Fox News puts the total around 40.

The argument ties the contemptible actions of Watters to his boss O’Reilly directly, continuing, “Watters takes right after his boss in serving as one of the media industry’s most extreme hypocrites… Over all those years of surprising folks with microphones, you might suppose that Watters would steel himself for the time when the camera turns toward him. Apparently not.”

On Monday night’s O’Reilly Factor, Watters himself spoke of the heated exchange, and although he denied punching Grim directly, he said to the point, “Things happened, and I regret that it happened.”

But that admission didn’t stop Wemple from identifying Watters — who is, by every account, a rising star at Fox News given his penchant for snark, strong opinions, and yes, his ambushes — as a “dish-it-but-can’t-take-it,” sort of guy. “The redeeming part for Watters is that he’s not as shameless as O’Reilly — an observation that applies to many scoundrels out there,” he writes.

J.D. Durkin (@jiveDurkey) is a columnist at Mediaite