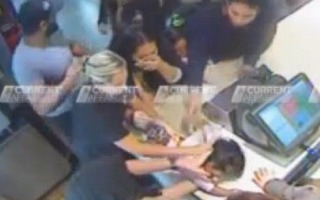 Staffers at an Australian McDonald’s banded together to save a small baby from choking. The one-year-old stopped breathing and began turning blue after a French fry became lodged in her throat. Her parents, panicked, cried for help, taking the baby up to the fast food restaurant’s counter, where video footage shows staff members and customers (one woman even left her place in the drive-through lane to come and offer help) laying the small child flat and rubbing her back in an attempt to dislodge the fry (or “chip” as the original report describes it).

Eventually, emergency personnel were able to give the crew instructions on how to help the baby over the phone, with hospital staff later determining that little girl had suffered a seizure, causing her to choke on her bite of food.

Fortunately, she was released from the hospital after a night’s stay. As for the McDonald’s staffers — they were given an award for their quick thinking.

And, to think, usually one has to stop short of physically assaulting a McDonald’s employee with a Filet o’ Fish to get anything resembling service, much less expect anyone to give a damn about your life. You’d best hope and pray you never collapse at my local McDonald’s, or you’ll end up keeled over under the soda machine while a crew member idly clips his nails not seven feet away.

Have a look at people acting like decent human beings, for once: