‘When I Arrived He Kissed Me on the Lips’: New Trump Accuser Gives Press Conference

‘When I Arrived He Kissed Me on the Lips’: New Trump Accuser Gives Press Conference 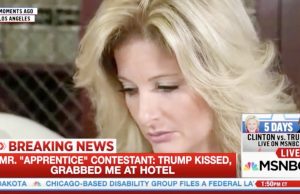 As of this afternoon, former Apprentice contestant Summer Zervos is the latest woman to accuse Donald Trump of groping her. Today, flanked — as promised — by lawyer Gloria Allred, she gave a press conference and detailed what happened to her after she spoke to Trump about a possible job within his organization in 2007.

During her first meeting with him to discuss the job, she said, he kissed her on the mouth. Of that, she reported, “This made me feel nervous and embarrassed. This was not what I wanted or expected.”

She claimed she “left early,” then said, “I called a friend who lived in New York because I was upset about the kiss. I also called my parents and let them know what happened.” After long talks with her friends and family, she determined that kissing must just be the way that Trump greeted people and decided to continue trying to get the job she had wanted and felt flattered to be considered for.

During a second meeting, she had believed they would be getting dinner, but was taken by an employee to a bungalow where she saw his clothing on the bed. She sat in the living room for 15 minutes, she said, until he emerged from the bedroom wearing clothes. Once again, he allegedly kissed her “open-mouthed.”

She described repeated attempts by Trump to take her into the bedroom and kiss her. At one point, he “thrust his genitals” at her, she reported. She claimed that when she rebuffed him repeatedly, he told her he did not think he had ever known love or been in love, then went on to give her advice on how to avoid paying her mortgage.

Eventually, she was offered a job for half of what she and Trump had discussed. When she reached out to ask him about it, he allegedly told her never to use his private number again, in spite of asking for hers on multiple occasions.

“This caused me a great deal of pain and anguish and I felt the need to confront Mr. Trump and ask him to apologize for his behavior,” she explained. “I also thoughtthat he might have been embarrassed by his behavior and this would provide him the opportunity to clear the air.”

Because of that, in April of this year, she made calls and sent emails trying to get ahold of him to give him the chance to speak to her about what happened almost a decade ago.

He did not return her calls, she said.

She is one of an expanding list of women making allegations of sexual assault against the business mogul and Republican nominee for President.

Watch above to hear her describe the entire alleged incident in detail.